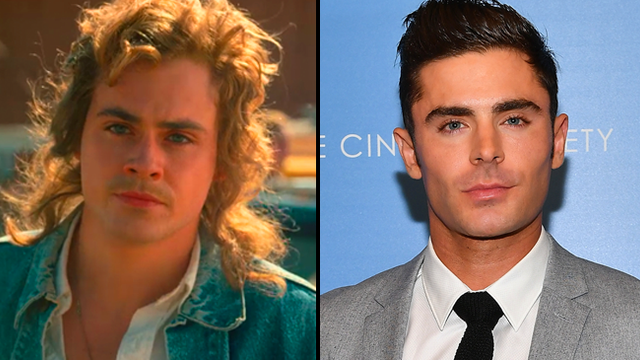 Is Zac Efron in Stranger Things 2? No, but this theory about Billy will blow your actual minds.

Seeing as we've all emerged from our Stranger Things 2 binge-watching pits, it's time to discuss some of the most important points of the show and by most important points, we mean Billy only. Despite being a MASSIVE jerk, the internet has low-key fallen in love with the California Mullet Boy. But have you noticed anything about him? Anything at all? Anything along the lines that he looks like someone incredibly famous?

At first, the internet was obsessed with the fact that Dacre Montgomery, who expertly plays Billy in the show, looks like he could be Zac Efron's mullet-wearing little brother. Like for real, is he related to the Efron family? Because DAMN, they look so similar!

Honestly. The actor who plays Billy (@dacremontgomery) on #StrangerThings looks like the upside-down version of @ZacEfron pic.twitter.com/GtFxyiDulm

I swear to god Zac Efron is in the first two minutes of Stranger Things: S2. I SWEAR. It’s not. BUT I SWEAR IT IS.

But then, people started pointing out that thanks to the Stranger Things timeline, Billy isn't *just* his brother... he could be Zac Efron's ACTUAL dad.

And here's the thing, the timeline really DOES work out for Billy to be Zac's dad in the Stranger Things universe. Billy arrives in Hawkins in 1984, and he's a senior in high school alongside Steve and Johnathan which means he's around 17 or 18 when the season takes place.

Of course, Zac's wikipedia page correctly lists his parents as David and Starla (we're not stupid) but what if that was just a cover up by Hawkins Lab? Does anyone have eyes and ears on Mrs Wheeler's whereabouts in 1987 yet? What if, after three years of living in Hawkins, Billy finally moves back to the west coast, meets a girl (or steals Mrs Wheeler from her husband looooool) and has a baby called Zac. THINK ABOUT IT.

It's not the first time this has happened. Remember in season one when the Internet absolutely lost it over how much Joe Keery (Steve) and Ben Schwartz (Parks & Rec's Jean-Ralphio) looked alike? The timeline may have been a little off to suggest that they were father and son in the Stranger-verse but Ben is still playing along with the 'Steve Harrington Is My Dad' storyline.

When will Zac Efron address this new conspiracy theory? Will he confirm it? Is Mrs Wheeler his real mum? Will we ever get a Stranger Things spin off where it's just Billy, Steve and Jonathan with their sons, Zac Efron, Ben Schwartz and Harry Styles?

It's what we deserve.