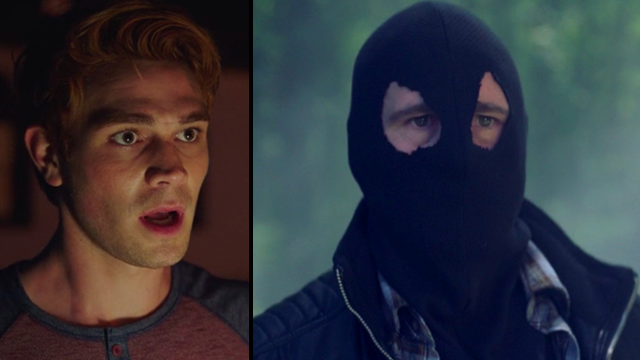 Ladies and gentlemen, we have a motive... or do we?

It ~looks~ like we officially have a motive for the murders and shootings happening in Riverdale and it might debunk a few of your favourite fan theories.

At first, it seemed like the killer was seeking some sort of twisted revenge on Archie by targeting people close to him but that was sort of thrown off kilter when Moose and Midge, who have no real connection to Archie, were shot at the end of episode two.

In episode three, The Coopers are sent an ominous letter from The Black Hood that seemed to outline the motive for this whole murder spree. In the letter, which you can read in full here, the killer details the reasoning behind each of his targets and it seems like they're all motivated by some sort of sinful action.

Fred Andrews, victim one, was an adulterer.

Ms Grundy, victim two, was a child predator who should have been in jail a looooong time ago.

Moose and Midge, victims three and four, were teenagers who were doing drugs and having sex in cars.

This new piece of information now begs the following questions: Is the Black Hood some kind of moral high ground serial killer? Is he a character that we've seen before? Is he working with someone or is he working alone? And WHO will be next on his hit list?

Polly Cooper, the teenager who got pregnant out of wedlock to her cousin - her words, not ours! - has already removed herself from the situation in Riverdale and escaped to a safe haven but there's still a bunch of morally corrupt people still living in Riverdale that could end up on the killer's list. (Maybe that's why unproblematic face Ethel's life was spared?)

Maybe Pop was right, maybe this guy IS the "Angel of Death" working on behalf of some higher moral power?

Here's where details about his identity get REALLY interesting though: In the promo for episode four, Betty is the next Cooper to be sent a letter from the killer. It's specifically sent to her, as opposed to her parents who received the first letter. Why is that important? Well, cast your minds back to the season one finale where Betty made her speech about how problematic everyone in Riverdale is, and how they can all do better.

The killer kind of seems to be acting on her behalf almost - weeding out the morally corrupt and criminal residents of the town. Him having heard her speech would mean he has deep ties to the community and would have been present at the Jubilee. With the tease about Betty being at the centre of the storyline this year, it could be true. Or, you know... it's all just a coincidence.

TUNE IN NEXT WEEK TO FIND OUT WHAT HAPPENS! XOXO, CSI: RIVERDALE.