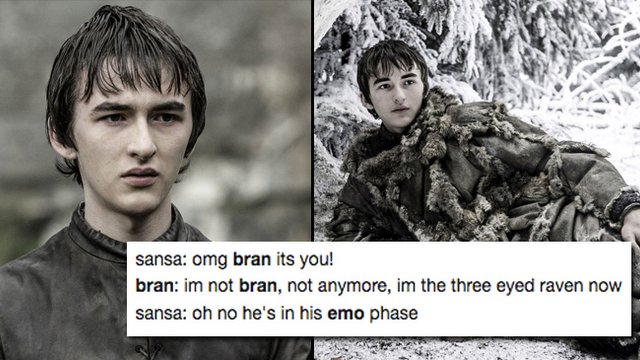 The Stark child is clearly going through a bit of a phase with his new moody attitude.

Game Of Thrones fans may have noticed something different about one of the Stark children in the last few episodes as season 7 sees Bran continue his journey to become the three-eyed-raven and return, at last, to Winterfell.

And while Bran's ability to see the past, future and more have definitely seen his character arc develop greatly since the early days, there is one change in particular that everyone seems to be pointing out.

Well, he is a teenager after all.

Yep, with his mix of brooding gazes into the distance, penchant for darker clothing and swoopy fringe, Bran Stark is just one MCR-tattoo away from acheiving full emo kid status. Honestly, we're kinda on board with it in principal but man, that chat with Sansa was pretty stilted. Come on dude, just 'cos you're emo doesn't mean you can't have a nice chat now and then.

But don't just take our word for it - here's just a few of the many people who've spotted Bran's new-found fondess for a Hot Topic-style aesthetic:

Bran Stark
- Error 404: emotions not found
- we get it, you vape
- emo pic.twitter.com/kIoaKOKMTN

Bran is just an awkward teenager going through his all black, emo music, call me the Three-eyed Raven phase #ThronesYall #GameOfThrones

Sansa: Bran, it's great to see you!
Emo Bran: Thousands of years ago in the darkness...no understands me....#GameOfThrones

Emo Bran Stark is the new Emo Kylo Ren. "For the last time, I'm the three-eyed raven now. Get over it, losers." #GameOfThrones pic.twitter.com/vGDvL3wf0Y

Rewatching GoT from the start and Bran was pretty emo back then too pic.twitter.com/NUACGftIvA

I feel like this is Bran's current playlist, not enjoying him being the three eyed teenage emo #GameOfThrones pic.twitter.com/y8eqI3KBg9

sansa: omg bran its you!
bran: im not bran, not anymore, im the three eyed raven now
sansa: oh no he's in his emo phase

So what do you think? Are you feeling emo Bran or nah? Let us know over in the Facebook comments.