This Traumatic "Elf" Theory Might Actually Ruin Your Christmas 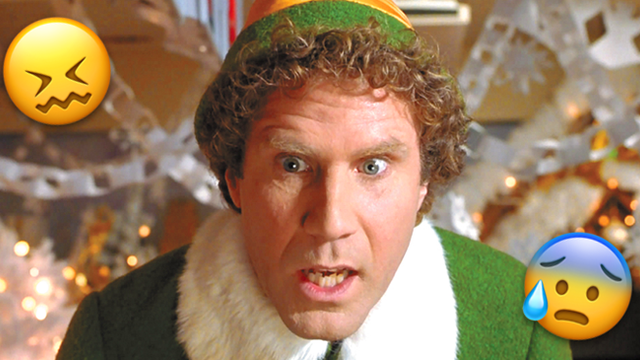 That's it. Christmas is cancelled.

Buddy the Elf came into our lives one snowy December in 2003 and changed the face of Christmas forever. 13 years later, we can't quite imagine the festive season without Will Ferrell japing around New York City in green tights and a fur collar.

But just like everything else, 2016 is about sh*t all over your most beloved Christmas film. The internet has just discovered a disturbing fan theory and it will make you regret ever clicking on this article.

Reddit user Batfan54 has just ruined Christmas with this disturbing theory about Buddy the Elf and we'll never be able to watch the film in the same way ever again.

Remember that scene in the movie where Jovie (Zooey Deschanel) is having a shower and belting out 'Baby It's Cold Outside'? And then Buddy - oh so innocently - joins in? Here's where our nightmare begins.

After her shower, Jovie asks Buddy why he was in the Ladies locker room while she was naked in the shower. Buddy then replies saying "I didn't know you were naked in the shower." Hmmm... interesting. So funny, so cute! Elves must not know how showers wor- HANG ON!

Earlier in the movie, we literally see Buddy having a shower like a normal human. So, what's the truth Buddy? Do you know how showers work or not?

The theory has a pretty brutal conclusion, so if you're already feeling cheated by this fun-loving grown-ass Elf, stop reading now. Otherwise, go right ahead.

"So what conclusion are we left to draw? Buddy, the sicko as he is, was actually trying to peep on Zooey while she was in the shower, and played his sick fetish off as innocence and just wanted to sing a Christmas song. It begs the question, what else has Buddy played off with his innocence? Here he brutally injures multiple children on their way home from school. Here he uses his obsession with "Syrup" to get horribly sh*t-faced on the job. And here he uses his so-called innocence to verbally abuse a man with a disability. I'm sure there are others, if I were to dig deep enough. Buddy is not the man you all thought - he is a demented man-child that's using his "innocence" to live out sick fantasies of abuse and sexual desire."