Uh Oh! Riverdale Has Some Bad News For Bughead Shippers... 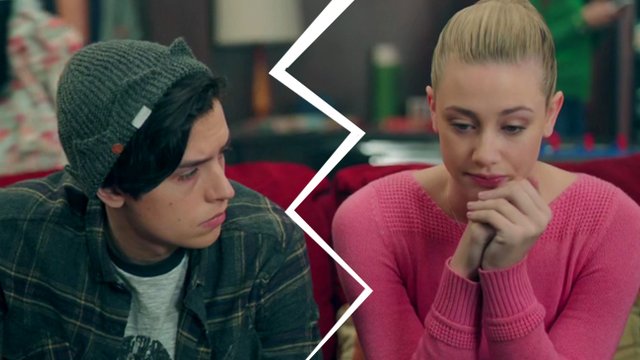 Riverdale's executive producer has some bad news for Jughead and Betty shippers.

Put your flags at half-mast and get ready for a 2 minute silence, as it would appear the Bughead ship might have sunk before it even left the harbour.

Riverdale's executive producer Roberto Aguirre-Sacasa sat down with EW to discuss the fate the fledgling relationships on the show and, unfortunately, the shipping forecast for Bughead doesn't look good.

"I would say that it’s still a very new relationship,” Aguirre-Sacasa said of Bughead. "But given the circumstances of what they’re doing, which is investigating a murder, and given that they’re both from very different worlds — Betty’s the perfect girl next door, the cheerleader, and Jughead’s the outsider from the wrong side of the tracks, the misfit, the loner — their relationship is going to be tested sooner rather than later."

This perhaps isn't too surprising when we think about it. They've only *just* got together, bonded by the difficult circumstances surrounding Betty's sister Polly and her murdered ex-boyfriend Jason Blossom, not to mention Jughead's difficult family situation. Any number of things could happen which can upset this balance. And, based on the rest of Aguirre-Sacasa's comments, we think Archie might have something to do with it.

As you probably know the show is based on the Archie comics series. In those comics a recurring storyline is the love triangle between Archie, Betty and Veronica. The girls are often seen battling each other for the attention of our ginger prince.

In fact, there were touches of this in the first episode of the Riverdale when Veronica and Archie made out in the cupboard at Cheryl's party, and Betty ran away crying. Well, it looks like we might be seeing more of that love triangle in the shows.

"That will always be at the heart of any Archie story," Aguirre-Sacasa said. "It’s just finding the right way to play it at the right temperature so you don’t burn it out too fast. You invest in all the characters, and you want them all to be happy — to me, that’s when a love triangle’s at its best, when you want all of the couplings to exist."

Are you on the Bughead hype?