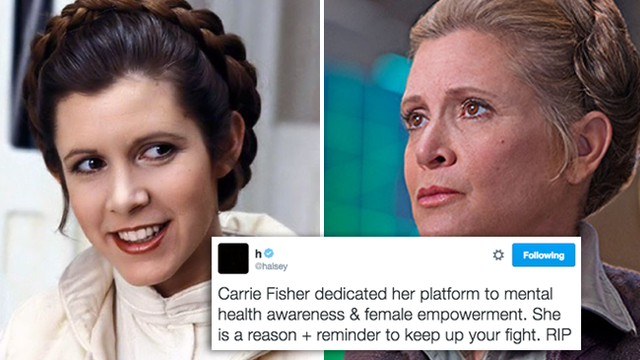 Man, we never EVER wanted to have to write this article. Today (Dec 27) Carrie Fisher passed away at the age of 60.

While Carrie was best known for her iconic role as the straight-talking, badass, 'not-gonna-take-any-of-your-shit-today flyboy' Princess Leia in Star Wars - and later General Organa - she was also an important and inspirational voice when it came to mental health and body image, an ally to the LGBTQ+ community, a phenomenal writer and one of the funniest, wittiest, warm-hearted people on the planet.

Co-stars and other celebrities are reacting to her passing with moving tributes, messages and stories.

There are no words for this loss. Carrie was the brightest light in every room she entered. I will miss her dearly. pic.twitter.com/GgIeYGeMt9

Princess Leia, @CarrieFisher - now one with the Force. Your kindness & sharp wit will be missed. #RIP PS: Thanks for the milk & cookies. xx pic.twitter.com/NeyyHNUuuG

.@CarriefFisher was a brilliant writer, actor, and friend. She was so much fun. I can't believe she's gone. https://t.co/wpxGvBWA0b

Carrie Fisher wore glitter in her hair. When I said I liked it, she ran her fingers through it and lobbed a handful at me. #TheGreatest  pic.twitter.com/T7NWGdJp8w

Carrie Fisher got SO MUCH SHIT for being female, getting older, gaining weight, being bipolar, but she still kept her sense of humor. ICON.

Devastated to hear Carrie has died. Was extremely lucky to meet her last month. So sad #ripcarriefisher pic.twitter.com/dR3ciZVKmE

Carrie Fisher spoke openly about her struggles w mental health. To me she was a hero - not only in the stars - but here on Earth as well.

Carrie Fisher dedicated her platform to mental health awareness & female empowerment. She is a reason + reminder to keep up your fight. RIP

My heart today.. I love you Billie. pic.twitter.com/2AhltGzn3P

“Carrie was one-of-a-kind…brilliant, original, funny and emotionally fearless. She lived her life, bravely...We will all miss her.”