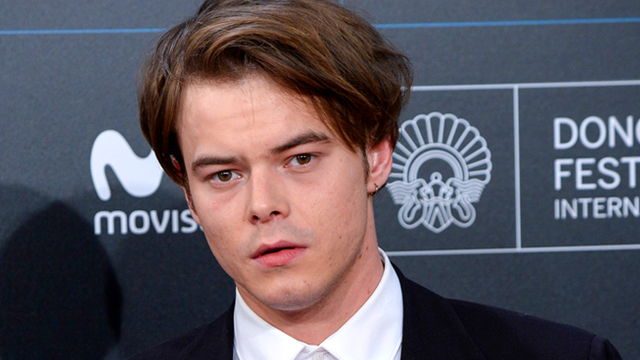 "First I learn that Charlie Heaton from Stranger Things isn't American and now I learn he has a son?? Amazing."

Charlie Heaton, who plays ya boi Jonathan Byers on Stranger Things, has managed to keep his private life fairly low-key since the first season of the show but with the heightened anticipation and obsession surrounding season two, he's had a bit of a nightmare in the press in the last few days.

Last week, he was denied entry into the US for the premiere of Stranger Things 2 after traces of cocaine were found on his jacket. And now he's back in the news for a whole different reason... he is reportedly a father to a three year old son.

According to the Daily Mail, Charlie has a three year old son with his former band mate Akiko Matsuura. The pair were two members of the band Comanechi until Charlie left the band in 2015 to pursue his acting career.

Apparently, his son was born in late 2014. A source told the Daily Mail that Charlie and Akiko aren't together but remain friendly for the sake of their child: “Charlie became a dad when he was just 20. He met Akiko when he was just a teen and fell head over heels in love. They’re no longer together but they have an amicable relationship for the boy’s sake."

Fans are shook to say the least.

I LEAVE TWITTER FOR THREE (3) MINUTES AND NOW I FIND OUT CHARLIE HEATON HAS A SON????? WHAT IN THE HELL

first i learn that charlie heaton from stranger things wasn’t american and now i learn he has a son?? amazing

I LEAVE TWITTER 3 SECONDS AND CHARLIE HEATON IS BUSTED FOR COCAINE AND HAS A THREE YEAR OLD SON. pic.twitter.com/5ZV1liSaqf

CHARLIE HEATON HAS A SON???? pic.twitter.com/mhltUQdXNN

Despite the reports, some fans are pretty damn sure that this isn't exactly *new information* because it's been known on the internet for years.

Why people are so surprised that Charlie Heaton has a son lol it was all over the Internet you just need to google him duh!

charlie heaton and his son archie are so cute omg i’m in love  pic.twitter.com/yyDomP6NjS

By the sounds of it, calling his baby a "secret love child" isn't quite as dramatic as the situation actually is. In fact, he hasn't hidden it at all, he just chooses not to make it public. It seems like it's only because he's been in the press recently that this information has made the headlines.

Neither Charlie nor Akiko have commented on the reports but if there's one thing we can confirm: that baby is cuuuuuuute!