Wait, Did Cheryl Kill Her Grandma In The Riverdale Finale? 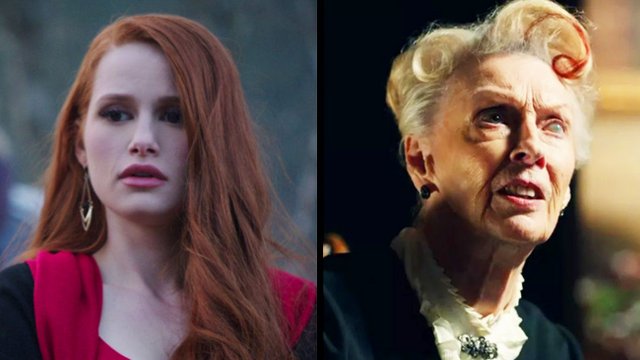 I don't know about you but since the VERY DRAMATIC season finale of Riverdale I've been spending most of my time trying to figure out what the hell happened. As we pointed out recently, the final episode left what is technically known as a "shit ton" of questions unanswered and we've been sleuthing for any clues or tips that might help us get the bottom of it. Honestly, I've never been so pressed.

One big question that fans have been asking is what happened to Rose Blossom, aka the scary old Grandma in the Victorian-style wooden wheelchair. I'm sure you remember her. I mean, how can you not?

If you remember, Cheryl sets ablaze the whole Blossom mansion up in the closing scenes. By this point, Polly is safe and well back at the Cooper's place and obviously Clifford Blossom is dead. But what about Grandma Blossom? She's not seen outside the burning building with Cheryl and Penelope which lead many to believe Cheryl had inadvertenly murdered her own grandma! Could it be true?

Well, it looks like we might finally have an answer thanks to Trevor Stines who played Cheryl's brother Jason Blossom (RIP).

In a Reddit AMA, a fan asked Trevor about the theory and, well, his response doesn't bode well for Grandma. "That... is a good question." Hmmmm, so that's not a no? Jesus christ, is there anyone in the Blossom family that isn't a murderer/been murdered?

Trevor went on to explain a few more things about his character and his role within Riverdale. Trevor said he guessed it was his own father that killed him all along. "That was my guess after reading the pilot! Nobody agreed with me, but look who's laughing now!" He only said his favourite character was Cheryl, which is kinda cute.

Another fan asked about why Jason is never heard speaking throughout the show. Trevor says he agreed with the writers decision to do so. "Jason's persisting silence through the season was, in my opinion, a good choice by the writing team", he wrote. "It really amplified the mystery surrounding the character, causing the audience to rely on the perspective of other characters to define who he was and what happened to him. Even I, as the actor, was learning more and more about him with each new script I read."

And the all-important question, will he be returning for season 2?

"I love the support! I'm not sure what twists and turns the writers have in plan for season 2, but Riverdale is a home to me now, I would never shy away from the prospect of returning!"

Intriguing! Of course, he might come back as Zombie if the rumours are to be believed. We think Trevor would look hot as a zombie, no? Too much? Ok then...