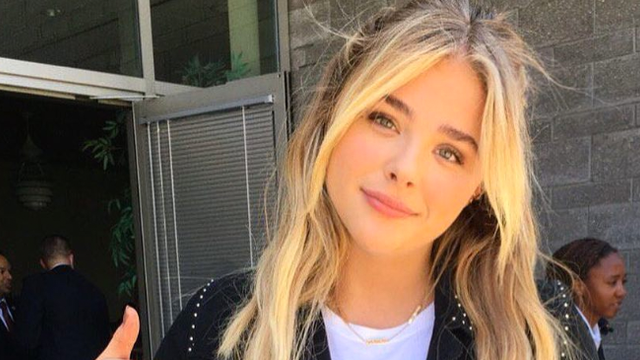 "How did this get approved by an entire marketing team?"

Uhhohhhhh, Chloe Grace Moretz just found herself in the middle of marketing nightmare after the poster of a film she's starring in, 'Red Shoes and the 7 Dwarves', got heavily criticised for body-shaming.

'Red Shoes' is a parody of Snow White in which a young girl finds herself born into world of skinny Princesses and struggles to be her true self as she fits into society. Chloe voices the main character. And the poster in question?

Well... on one side is a tall and skinny Snow White while on the other side is a shorter, heavier version of the same Snow White. The caption reads, “What if Snow White was no longer beautiful, and the dwarfs not so short?” Doesn't sound great, does it? Just wait till you see it.

After the poster and (now deleted) trailer was seen at Cannes Film Festival, model Tess Holliday called out the marketing campaign and tagged the film's star Chloe Grace Moretz in the process expressing her disappointment.

How did this get approved by an entire marketing team? Why is it okay to tell young kids being fat = ugly? @ChloeGMoretz pic.twitter.com/PVhgwluGTM

After being notified of the poster and receiving a ton of online backlash in turn, Chloe, who voices the main character, was forced to apologise on Twitter for the apparent "body-shaming ad" and clarify everything that was going on.

I have now fully reviewed the mkting for Red Shoes, I am just as appalled and angry as everyone else, this wasn't approved by me or my team

Pls know I have let the producers of the film know. I lent my voice to a beautiful script that I hope you will all see in its entirety https://t.co/IOIXYZTc3g

The actual story is powerful for young women and resonated with me. I am sorry for the offense that was beyond my creative control https://t.co/HZP2ydPCAX

The actual storyline of the film itself hasn't exactly pleased a lot of people either. One of the trailers features Snow White arriving home and undressing while two dwarves look on, seemingly horrified, from under the bed as she transforms into her true self.

However, the film's producer Sujin Hwang has said that the actual message of the film is something entirely different to what came across on the movie's poster: “Our film, a family comedy, carries a message designed to challenge social prejudices related to standards of physical beauty in society by emphasising the importance of inner beauty."

It's now been confirmed that this particular marketing campaign has been "terminated" but the film is still scheduled to be released in 2018.