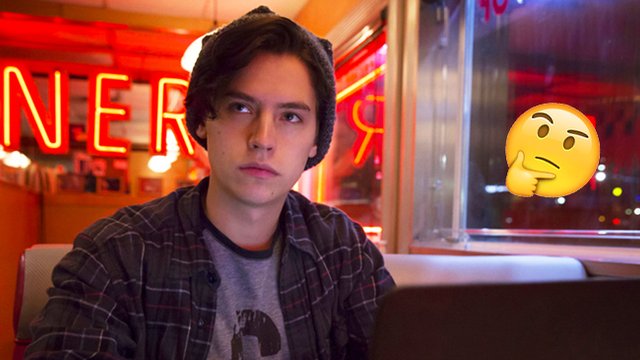 If you watched Riverdale over the weekend then probably you have questions about the newest romance in town, Jughead and Betty.

Many people had hoped Jughead’s character would be asexual, as he was portrayed in the recent Archie Comics series from which Riverdale is inspired along with many other versions of the Riverdale comics over the years.

The relationship has received a mixed reaction so far. Some fans felt the Riverdale writers missed an opportunity to represent asexual and aromanic identities, which are almost non-existent in TV and film. Others pointed out that Jughead and Betty’s kiss doesn’t necessarily mean he isn’t asexual or aromantic, that it could in fact be the start a coming-out storyline. Then there are the people who are just happy to have a new ship to write about on their wattpad accounts. Amen to that, sis.

Woke bae Cole Sprouse, who plays Jughead in Riverdale, had previously expressed his desire for the character to remain asexual. However, in an interview with ComicBook.com back in February he discussed Jughead’s relationship with Betty and he has some pretty insightful things to say about ‘Bughead’. Watch the video below:

He starts by pointing out that there have been differing representations of Judhead’s sexuality in the past. "There are two forms of representation Jughead has received over time. In Zdarsky’s Jughead [Chip Zdarsky, the writer behind the most recent Archie Comics series], he’s asexual. That’s the only Jughead where he is asexual. He’s aromantic in the digests [which ran from 2005-2010], which is a different thing and deserves attention as well.”

While researching his part, Cole also discovered that a relationship between Jughead and Betty has been hinted at before. “What I found when I was really diving in — because once we started putting Jughead and Betty together, I started diving into try and find out if that’s a narrative that even exists in the digests, and it turns out, it is.

"It’s a narrative that’s existed for a long time. There are a handful of digests in which Jughead would say things like ‘Oh, Betty, if I did like women I guarantee you would be the one I would marry outright. You are the best person around.’ He would say these things that are really romantic and cute with an appreciation for Betty and I think it’s become clear to me now that Roberto has taken off with that."

Cole went on to explain why, despite his own support for greater representation for the asexual and aromantic communities, there are good reasons to get behind Bughead.

"As much as there’s a large community of people who really want to see Jughead as asexual, and I am a huge proponent for that kind of representation, there’s also quite a large community of avid Archie fans that want Betty and Jughead to be together, too," Sprouse said. "I think these are things we need to juggle when considering what Jughead is in Riverdale.

“This Jughead is a person who is looking for a kind of deeper companionship with a person like Betty and she ends up being this super nurturing, caring, catering person that with Jughead’s super screwed-up past they end up diving into each other and it ends up being a beautiful thing.”

Cole, being the clever man that he is, expected the backlash but believes people will be won over in the end.

“How are people going to respond? Truthfully, they’re probably going to be quite incendiary about it at first. Do I think that’s ill-placed? No. Do I think they should give it a shot? Yeah, I do, because I think that after filming thirteen episodes, it makes sense to me and if it makes sense to me as the person who’s dumping so much time and so much argumentation into trying to represent Jughead correctly, it will make sense to other people as well.”