Cole Sprouse's Instagram Got Deleted And His Fans Are In Mourning 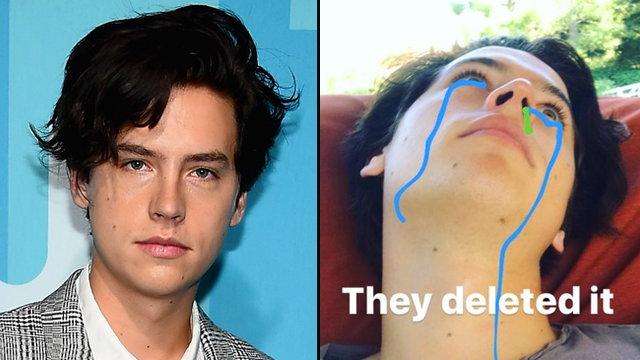 Pour one out for Sprousemasterworks.

It's a sad day for Cole Sprouse fans on Instagram as one of his legendary accounts has been hacked and deleted.

As you may already know, Cole has a total of THREE Instagram accounts - well, two now if you exclude the now deleted account. Wah. His main account (@ColeSprouse) features shots of his incredible photography alongside smouldering pictures of himself shot by other talented photographers. It's quite a treat.

And then there's @camera_duels which is a fine curation of pictures of people who secretly take photos of Cole out in public, and how he manages to pap them caught redhanded in the act. A sleuth that Jughead himself would be proud of.

I should have guessed by the denim bedazzled devil's lettuce ball cap that the wearer wouldn't have the subtlety to pull off a proper camera duel. There, do you see her my fair audience? In the distance, past KJ's moai profile, the girl with the avocado phone case and pestle knuckles, giggling and wiggling like a toddler in a wicker chair and smelling like one of Marley's dreads. "How do you know she was taking a picture of you cole?" "Maybe she was taking a picture of KJ." Hmm, good point, but have you ever considered: eat my ass??? I know for a fact that I'm huge with the aging 420 audience.

But the third Instagram account that has now sadly been deleted by a hacker was Sprouse Masterworks. The account was a collection of Cole Sprouse fan art found by Cole himself and shared on the account with poetic commentary. It was exquisite. And now it is no more.

Sprouse Masterworks was tragically hacked and turned into a meme account called KingHumor7. The hackers deleted all the sketches and works of art on the account and started posting unfunny memes.

But just because the account is dead hasn't stopped people from sharing their own artwork and memories of the account under the hashtag - you guessed it - #sprousemasterworks on Insta.

Here's some of the sketches we have lost, but not forgotten.