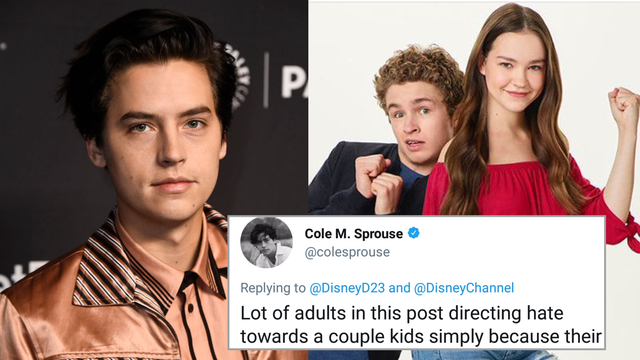 The Disney Channel alum stood up for the young actors following their casting announcement.

The leads in the upcoming Kim Possible live-action film were announced earlier in the week and it was a significant step toward bringing the iconic cartoon characters to life.

Sadie Stanley and Sean Giambrone will play the roles of Kim Possible and Ron Stoppable, however, not everyone had positive things to say about the casting choice.

Criticism in the acting industry is par for the course, but Cole Sprouse was NOT here for anyone bullying the up and coming actors.

Lot of adults in this post directing hate towards a couple kids simply because their cartoon doesn’t look the same anymore. You guys need to grow the hell up and realize you’re talking about kids who are likely happy to have gotten the job. Kids who, in some way, might hear you.

After seeing negative comments online about the pair, Cole decided to step in and remind people that they were, indeed, talking about young people.

"You guys need to grow the hell up and realize you’re talking about kids who are likely happy to have gotten the job. Kids who, in some way, might hear you."

Cole is right. No matter what you think of the casting, this is a huge opportunity for Sadie and Sean. People did a ton of fancasting for the film, however, the decision was up to the studio and they were clearly impressed with what they saw from the pair.

Cole and his brother Dylan were young actors who spent the majority of their childhoods on television and film sets. If anyone knows what it's like to deal with the pressures of being a young performer, it's Cole and Dylan.

Meanwhile, this will be the first major role for Sadie Stanley, a 16-year-old from South Carolina. 18-year-old Sean Giambrone previously appeared in The Goldbergs and The Emoji Movie.

While a few people have been unkind, many are standing up for the two and expressing their excitement at the casting decision.

I will fight anyone who tries to bully Sadie Stanley. Nothing but respect for MY Kim Possible pic.twitter.com/U1Uxl9DV97

I actually really like Sean Giambrone and think he’s awkward enough to play a good Ron. I also love seeing unknown actors like Sadie Stanley getting a shot at a lead role. So idk about y’all but I’m excited!