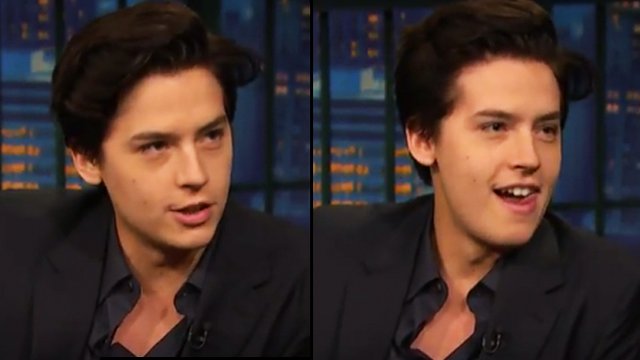 Cole stopped by Seth Meyers to talk dog casting and his intial audition to play the role of Jughead in The CW series.

Riverdale star Cole Sprouse stopped by NBC's Late Night With Seth Meyers yesterday (October 24th) to talk season 2 of the hit CW show as well as recite some creepy af poetry from his childhood. As you do.

First up, Seth apologised for having no idea who Cole was until recently, before they chatted about his previous job in a comic store and his first audition. Sprouse also revealed that he was quite wary of doing Riverdale as he didn't want too much of the Archie comic mythology to change but was later won around by the high quality script and the cool new take on the story. However, there was one original point from the comics he was inisistent on keeping - Jughead's dog:

"For some reason I was addicted to the idea of having an English sheepdog, like he is in the comics...For a week I was trying to wear Roberto (Aguirre-Sacasa, show developer) down about this, and we got this dog. And this dog was the worst actor...it barks the whole time, it didn't hit it's mark, it broke fourth wall consistently, it was just no good".

Hey, you live and learn right?

Check out the full interview below:

Cole also gave his fans a few updates from backstage at 30 Rock throughout the day by taking over the show's social accounts and fans were superhyped to check out Jughead on the couch later that night:

Riverdale's second season has been gaining huge ratings on The CW as well as garnering a major following worldwide thanks to it's distribution on Netflix.

Check out Cole's co-star KJ Apa taking on our 'Impossible Riverdale Quiz' in the video below: