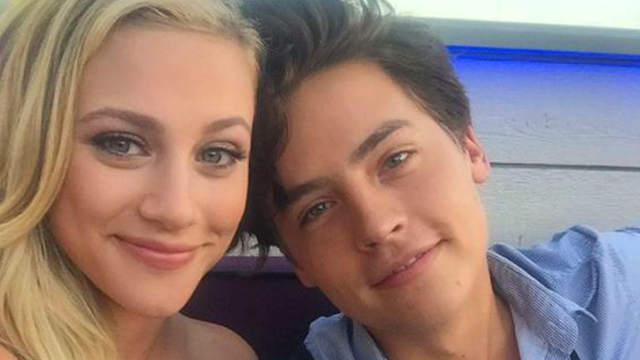 “Since the show began, people have wanted Lili and I to be together."

Ever since Betty and Jughead first hooked up on Riverdale, the entire world has been obsessed with them (well, maybe not the whole world but you catch our drift. Just go with it, we like to be dramatic.) Rumours soon started swirling that their real life counterparts Cole Sprouse and Lili Reinhart were an IRL couple after fans reported that they were smooching at Comic Con and heading out on dates in Vancouver, where the show is filmed.

The pair have both recently shared Instagram pictures of each other alongside the cutest captions but neither of them have addressed the whole IRL situation in an interview or on social media... until now.

Cole, Lili, KJ Apa and Camila Mendes took over the cover of Entertainment Weekly this week, with all four serving their best Calvin Klein jeans aesthetic and killing the fandom in the process. The foursome also did an interview for the magazine where Cole spoke about the obsession with his on-screen and off-screen relationship with Lili.

He then goes on to address how he feels about the fandom being so invested and interested in his personal relationship and the chemistry with Lili: “But truthfully, it’s very pleasing that people talk about Lili and I in that way because it means that we’re resonating so strongly that people really want that to be true.”

We see what you did there, Cole. Skirt around the issue. Confirm or deny nothing - because he would flat out deny it if it wasn't true, right? Keep everyone theorising in silence, living vicariously off Bughead on the show instead of in real life. Keep us all coming back for more, episode after episode.