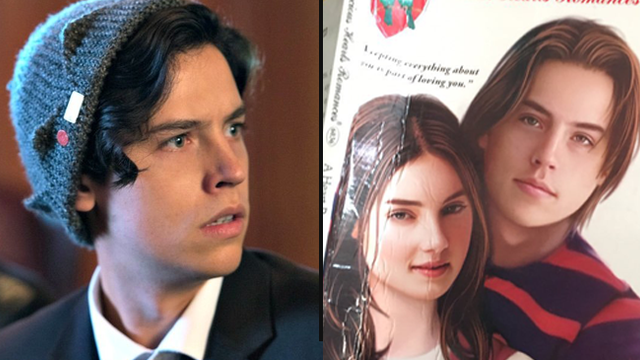 It is both a dream and a nightmare.

Cole Sprouse has truly had the glo-up of a lifetime, hasn't he? From lil' baby Ben Geller on Friends to an incredible photographer and Riverdale's resident sleuth, all our timelines consist of these days is Cole and Jughead - and we're not complaining.

So with his face plastered everywhere, it was only a matter of time before someone stole his likeness. The first people to get there? A freakin' romance novel publisher.

Shoutout to this publisher for using my face as the love interest of a romance. "A Heart Remedy From Mr Heartbreaker" in trashcans near you. pic.twitter.com/WChX0xycja

First of all, LOOOOOOOOL and second, where does one purchase this book? Asking for a friend, of course. Anyway, Cole wasn't here for his face being used to sell a (probably terrible, let's fact it) YA romance novel.

But there seems to be a twist in our tale, ladies and gentlemen, because Cole is not the only celebrity to have had his identity stolen by the book publishers. After tweeting the snap, Cole's followers started replying to his tweet with other book covers that featured the likenesses of Zayn Malik, Kendall Jenner and Justin Bieber and, quite disturbingly, Ariana Grande and Brad Pitt. (Not sure if we wanna read that one tbh.)

@colesprouse @ArianaGrande has a cover of that book too pic.twitter.com/xzaso4lGRH

Oh, and in case you were wondering if it was actually Dylan's face that the Precious Heart Romances publishers used... it wasn't. And Cole has the receipts.

@colesprouse to all of you who think that's Dylan's face and ~I~ can't tell the difference between my own damn twin, sit the hell down. Pic: pic.twitter.com/7oMS2gg18c