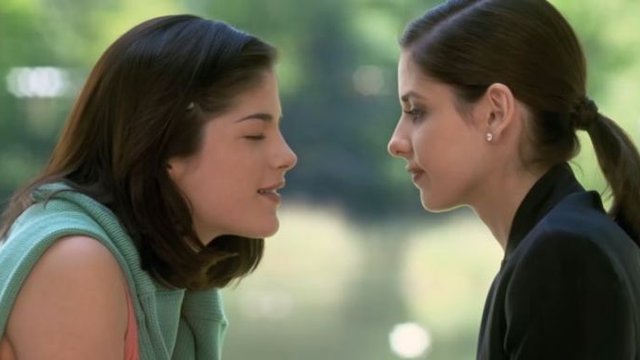 A very famous scene from Cruel Intentions was oddly absent in a recent TV airing...

The teenage classic Cruel Intentions was screened on TV in the US recently with one very famous scene missing that had fans complaining on social media.

Entertainment Weekly reports that E! showed a version of the 1999 movie that cut the same-sex kiss between Sarah Michelle Gellar and Selma Blair.

The kiss became an iconic moment of the 1990s and won the MTV Award for Best Kiss.

Viewers quickly took to Twitter to criticise E! for censoring the moment:

Why did @e_entertainment edit out the "Cruel Intentions" Kathryn/Cecile kissing scene and edit the word "girlfriends" to "pillow friends"?!

Everyone in the room is pissed.

This night has been ruined.

@SarahMGellar @people Hey @e_entertainment what is this about you cutting the famous kiss from Cruel Intentions?? What is wrong with you??

Even Sarah Michelle Gellar herself has expressed her annoyance at the decision.

E! have since clarified to EW that the cuts were due to using an older, made-for-TV version of the movie and that they were not able to "oversee the standards and practices" involved. They would also be willing to re-air the movie at a later date with the scene intact.

However, the question of why it was cut in the first place remains unanswered.

What do you guys think? Let us know your thoughts on this story over on our Facebook page.