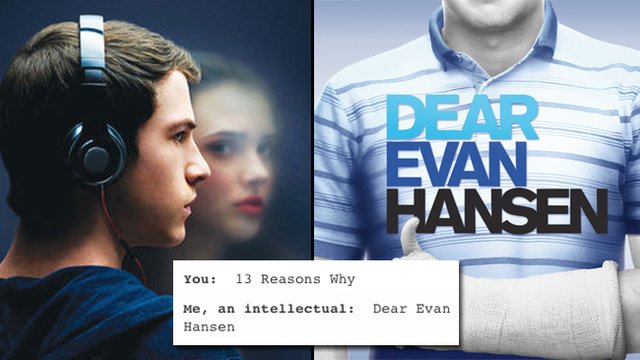 The smash hit of Broadway is the perfect antidote to the recent criticism of the Netflix series.

Move over 13 Reasons Why - if you want to see art that tackles teen mental health issues in a sensitive and inspiring way then its time you got to know Dear Evan Hansen, Broadway's latest smash hit.

With a score composed by the HUGE musical theatre duo of Pasek and Paul (you know, they did the music for that slightly popular film La La Land) and starring Pitch Perfect actor Ben Platt, the show addresses similar thematic territory to 13 Reasons Why, focusing on Evan, a high school senior with a social anxiety disorder, and how he and his fellow students deal with the aftermath of a classmate's death.

Critically acclaimed and beloved by drama geeks everywhere, the show has also garnered a great deal of support from mental health advocates, putting it in direct contrast to the controversy that has surrounded the Netflix series in recent months and the wider criticism of its portrayal of suicide and depression.

In fact, many fans have made the direct comparison between the two stories, encouraging fans of the series to put down the laptop and get to the theatre asap (or at least, you know, download the soundtrack).

Here are just a few of the Broadway diehards spreading the good word of Evan online:

3) Maybe you should worry about them...

5) Say it louder for the people at the back:

Dear Evan Hansen is what 13 Reasons Why wishes it was.

7) Let the dancing do the talking:

All y'all obsessing over 13 Reasons Why and I'm over here like: "But, Dear Evan Hansen, though..." pic.twitter.com/QjCjVzAJoU

8) It actually even manages to improve 13 RW:

dear evan hansen x 13 reasons why will be the death of me pic.twitter.com/639echifY6

9) Taking it to the streets!

ALL the feelz after finishing @13ReasonsWhy. Took this other day. Thought of @DearEvanHansen & my pic from a few days ago. #devastated pic.twitter.com/qrAeTsNofz

When you're watching 13 reasons why and you see a Dear Evan Hansen reference @DearEvanHansen @13ReasonsWhy pic.twitter.com/ujs0HUYU1Q

Reading 13 Reasons Why while listening to Dear Evan Hansen so idk if I hate myself or im a masochist or if I just really love being sad pic.twitter.com/rvwoXAe207

Each to their own.