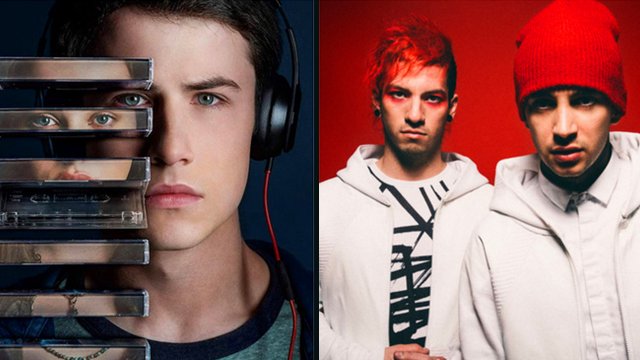 If you like to spend your free time fangirling over Twenty One Pilots AND 13 Reasons Why then we have some very good news for you. Turns out, one of the breakout stars of the Netflix show is a massive TØP stan and the clique have been digging up his old tweets about Tyler & Josh.

Devin Druid plays Tyler Down in 13 Reasons Why. The 19-year-old actor portrays the nerdy photographer who oversteps the mark by stalking Hannah Baker and ends up on one of her tapes. In real life, Tyler is a Twenty One Pilots fanatic. He attracted the attention of the skeleton clique during a Q&A on Twitter a while back and now fans of the show and TØP are finding all his old fanboy tweets about the band.

You can never hide from the clique.

clique is finding old tweets i c u

His first tweet about TØP was a reply to his mum who missed out on tickets for a show back in 2015. He took the news well tbh.

That time he tweeted Josh...

...And then called on the clique for support.

I'm gonna go give my dog a bath. My tweet to Josh better have 100+ favs by the time I get back. Don't disappoint me, clique.

That time he got into a ~misunderstanding~ with some fans about his favourite TØP songs.

Clique pls I love every song and they're ALL my "favs". I just tweeted some that were instrumental in my introduction to the band

"You can't have one without the other, so both" - the perfect response.

We've all done this at one point, haven't we?

GUYS I FOUND ME @twentyonepilots pic.twitter.com/c6QXo3onHj

He speaks the truth, the whole truth and nothing but the truth.

the clique is strong af what the heck

More recently, the skeleton clique have been helping him track down some older merch.

clique where can i get officially licensed vessel era merch where the band actually gets profit, cuz ur boy wanna look fly and support

welcome to stan twitter :) we basically do that for a living..

the clique is everywhere

you're in the clique, you're a Pittsburgh Penguin fan... can you get any cooler??

OMG YOU LIKE @twentyonepilots TOO? GOD BLESS YOUR SOUL

This tweet probably sums up the whole thing best.

we're in a hiatus. we're sad and bored. anything and everything is up for grabs.