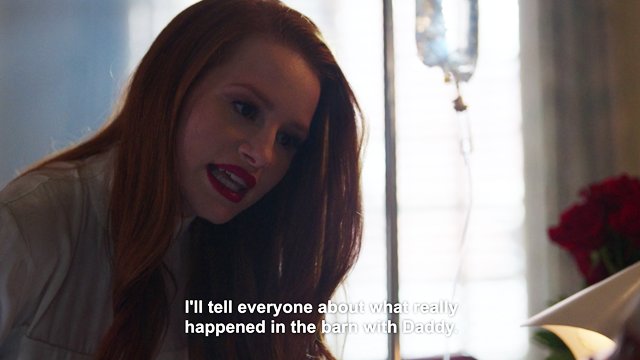 Is Cheryl saying what we think she's saying?

While everyone was getting their panties in a twist about who shot Fred Andrews and whether or not Bughead have banged yet, there was another drama unfolding in Riverdale which a lot people had forgotten about.

If you cast your minds back to finale of season one you'll remember that Cheryl literally burnt Thornhill, her family home, to the ground. Possibly with her Grandma inside!

No one exactly knows why she did this other than the fact that if you fuck with Cheryl (i.e. murder her brother and use the family business as a drugs smuggling front) then you can bet your ass she is going to come for you eventually. Considering her dad is dead (at least, we think he is), that leaves Cheryl only her mother, Penelope, to take her anger out on (deservedly, might we add).

Last we saw Penelope she was screaming at Cheryl outside a burning Thornhill. Cut to season two and she's looking a little... crispy. That's when we saw Cheryl say some very eyebrow-raising things.

Cheryl then goes very 'Dark Betty' on her own mother.

I mean, anything was better than that though, so that's not really saying much.

So what the fuck is going on up in hurrr? When Cheryl says, "I'll tell everyone what really happened in the barn with Daddy?", does she mean that Penelope killed Clifford Blossom aka HER OWN HUSBAND?!

On the surface, this makes sense. Clifford did, after all, kill her only son. Of course she would be mad, so it's totally reasonable (well, in the overly-dramatic world of Riverdale) to suggest that Penelope might have killed her husband. Except, why would Cheryl be so angry about that? She was just as upset, perhaps even more so, at her brother's death. Surely if her mother had killed her father in revenge, Cheryl would understand. Something doesn't seem right about the situation.

Did Penelope really run into the fire to save a hideous old portrait, or was there something else in there that she wanted to save? As we mentioned before, Cheryl seems to have forgotten that her grandmother might have been staying in Thornhill at the time of the fire. Was Penelope trying to save her? Or (brace yourself) what if Clifford didn't die at all, and Penelope worked with him to fake his death, but then realised he was hiding in the house and so she tried to save him? That would also explain Cheryl's comment about the "truth about daddy". Lady Penelope of Thornhill ain't getting burnt up for no painting, that's for sure.

We don't have any answers for certain. All we know is that there's more dark shit happening with the Blossom family and, honestly, we don't we can handle it and now we've got another 21 episodes to get through. FML.