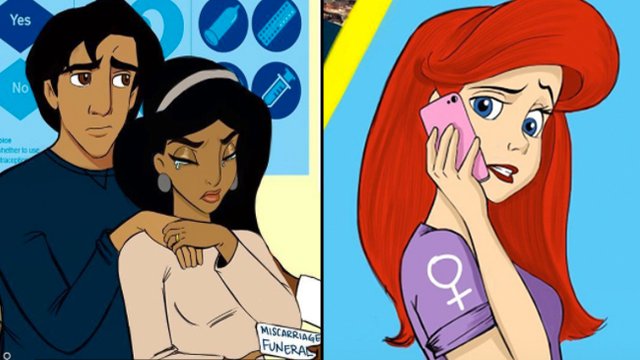 One artist on Instagram has used her favourite Disney Princesses to make a serious political point.

An illustrator has been making some serious political points with her new range of Disney Princess Edits posted on Instagram.

Maritza Lugo, alongside writer Danielle Sepulveres, has uploaded a series of images showing your Disney faves, from classics like Jasmine and Ariel to more recent princesses like Tiana, being denied healthcare in a protest against the dropping of The Affordable Care Act in the US.

Last night, while most of us slept, the Senate took it's major first steps in repealing Obamacare or the Affordable Care Act. This is not to be had. This is not to be tolerated. Millions of Americans like you & I depend on the ACA. Today, the New York Times wrote: "Republican leaders say they will work closely with Mr. Trump developing legislation to repeal and replace the health care law, but it is unclear exactly how his team will participate in that effort." We, as a nation, can not afford to lose the most accessible health care plan that we as a country have ever seen. We can't afford to see what Donald Trump's "plan" will be. Please call your representatives. Don't sit on the sidelines. #plannedparenthood #standwithpp #aca #illustration #maritzalugoart #disney #princesses #ariel #thelittlemermaid #artwork #art #disneyprincesses #fuckmitchmcconnell

The drawings also show the impact the loss of Planned Parenthood will have on access to women's healthcare, another issue currently under heavy debate in the US.

Belle was super happy to get birth control. As someone who was dependent on it, finding out she was denied her refill will only make Belle's life a little harder. Birth control helps women in so many ways and it isn't just for preventing pregnancy. Representative Kirsten Gillibrand was working hard to protect birth control while the GOP was trying to overturn #ACA. Slate published an article on this yesterday. The Senate voted to leave 55 million women without affordable birth control. No-copay birth control was a hallmark of ACA, allowing 55 million women to have more control over their bodies. Now insurance companies would no longer be required to cover contraceptives, and pregnancy would be considered a “pre-existing condition.” #standwithpp #plannedparenthood #beautyandthebeast #disney #disneyprincesses #illustration #socialjustice #maritzalugoart #artwork #belle #fucktrump

In our final rendition of Disney Princesses VS. the GOP, we remember that last year we had Tiana getting her HPV vaccine in part to promote Cervical Cancer Awareness month. And to combat some of the fallacies that perpetuate about the vaccine itself, which include the idea that only girls should get it, it promotes sexual behavior, or that it’s ineffective. But this year there’s an even bigger issue at hand. And that’s Trump’s overall attitude towards vaccines. His insistence that vaccines cause autism has not waned, in spite of all scientific evidence to the contrary. Trump’s most recent claim is that there will be a better replacement to ACA which will be less expensive and available to everyone. Details of such a wonderful concept? There are none except the phrase that Americans will be “beautifully covered.” This sounds like what Beyoncé would describe as a "sweet dream or a beautiful nightmare" and we're guessing it's not the sweet dream. #disney #princesses #obamacare #tiana #standwithpp #aca #disneyprincess #vaccines #illustration #artwork #princessandthefrog #blacklivesmatter

And, in a sad piece of irony, these images are a follow-up of sorts to pictures posted at the beginning of 2016 to promote the increased access to women's healthcare the ACA had provided.

A year ago, @daniellesep & I kicked off 2016 by going viral for #cca month. We got hate from anti vaxxers & they tried to get Disney to sue us. Ladies, get checked out. Did you know that 56% of dudes have never gotten an std TEST???? These dudes are TRIFLING. Do not let anyone near your precious lady parts without getting tested. Anyway, Danielle and I have only gotten more "extra" and ooooh, I can't wait to show you what we're doing next./a>

Many high profile artists have spoken out in recent months after President Trump vowed to "repeal and replace" the ACA while also condemning the Planned Parenthood organisation. Musicians including Halsey, Melanie Martinez and Katy Perry all took part in the Women's March protests across the world on the day after Trump's inauguration.

To learn more about the issues raised in the pictures, head over to the Planned Parenthood website here.

Check out a few more of the Disney Princess images below:

Previously, we saw Aladdin & Jasmine happy & ready to start their family. This year, however, it's taken a dark tone. Why? Because Trump just nominated former U.S. Senator from Indiana Dan Coats for Director of National Intelligence and he’s just one of many Republicans who back strenuous measures against Planned Parenthood and restricting a women’s right to choose. Indiana is a state along with Louisiana and Texas that have been trying to sign into law a mandate that would essentially force women to provide funeral services for aborted tissue and miscarriages. So today’s illustration has to do with family planning and how we’re afraid it could be affected by this new administration, based on people like Mike Pence, Dan Coats, and honestly the entirety of the Texas GOP. Also considering that it’s Jasmine and Aladdin looking for some family planning? Here’s hoping they don’t have to deal with Trump’s Muslim registry first. . . Words by @daniellesep /drawing by yours truly. #disney #princess #aladdin #jasmine #familyplanning #plannedparenthood #fucktrump #illustration #artwork #awholenewrepublicanworld #maritzalugoart #standwithpp

The animated Pocahontas film without a doubt presents an erroneous romanticized view of colonialism, kidnapping and sexual appropriation. And last summer Donald Trump kept condescendingly referring to Elizabeth Warren as Pocahontas because the Republicans demanded proof of her claimed Native American heritage. It's about time we talked about Native Americans and how they could be affected under a Trump presidency. All of Trump’s talk about immigrants and who belongs in this country would be comical if it wasn’t so tragic considering blemishes on American history like the Indian Removal Act of 1830. Beyond the troubling issue of what the future holds for the pipeline is healthcare overall for Native American groups. Did you know that they are not allocated the same level of federal health care as other people? But it’s likely to expect that Trump will parade into this unique area of healthcare like John Smith, plundering and damaging all the way through. After all, records indicate that John Smith described pre-teen Pocahontas as “nubile and sexy” which sounds like the 17th century version of “grab them by the pussy.” Words by the brilliant @daniellesep #standwithpp #dapl #illustration #disneyprincess #disney #pocahontas #fuckdonaldtrump #artwork #art #socialjustice #aca #obamacare