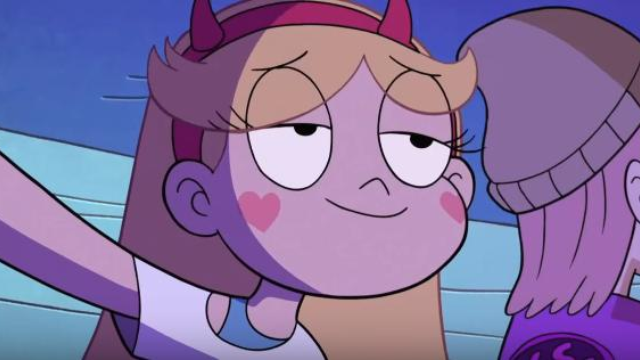 If you grew up watching Disney programs, you'll know that things over there have always been enjoyable but...safe. A few years back, Disney introduced its first live action same sex couple on Good Luck Charlie. Now, some eagle eyed fans have spotted what appears to be the very first instance of a same sex cartoon couple kissing on the channel.

Disney XD's Star vs. The Forces of Evil, seems to be following the trend of similarly progressive programming.

In season 2 episode 39, the show's lead, Star, is disappointed when she gets a bit friend zoned by her love interest, Marco. Soon everyone around them begins kissing and, at around 1:28, a shot of a gay couple sharing a romantic lip lock comes into shot.

It only lasts about two seconds and is certainly not the focal point of the scene but it's still huge. It demonstrates inclusivity on a kids programme and shows that relationships don't just look one certain way.

Someone even pointed out that Cartoon Network has had gay storylines in its programming but never an actual kiss before.

Cartoon Network: We can accept gay love but god forbid we can't allow so much as a kiss on the lips that's just racy
Disney XD: pic.twitter.com/twN9K2qW3O

Well, done Disney! Now, when can I expect a TV show with a gay crime fighting couple as the leads? I'll wait.