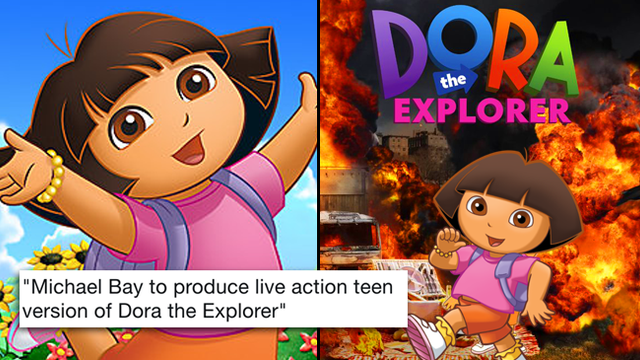 How do you say "WTF" in Spanish?

You know what, we really didn't need *another* live-action movie of a beloved childhood cartoon... but we're getting one because it's 2017 and nothing is sacred anymore. A real life Dora the Explorer movie - that absolutely nobody asked for - is coming whether you like it or not.

The live-action version will center on a teenage Dora, as opposed to the seven year old we all know and love from Nick Jr, who moves to the city to live with her cousin Diego. No other details have been released just yet but you can probably guess Swiper will probably end up as a drug-dealing super villain who owns a bunch of killer robots. No word on whether Dora will continue to teach us how to speak spanish, either.

The film will be written and directed by Nick Stoller and produced by - and here's where it gets VERY CONFUSING - Michael Bay.

For those of you that aren't familiar with Michael Bay's work, his previous credits include: Bad Boys, Bad Boys II, Armageddon, Pearl Harbour and all the Transformers movies... He's basically a (problematic) action movie director who loves explosions and very very tiny hot pants on his sweaty female leads.

Just when the internet thought live-action Dora would be some kind of Veronica Mars/Nancy Drew teenage detective type of gig, the inclusion of Bay's name on the roster has now got everyone is losing their damn minds...

How I imagine the live action Dora the Explorer produced by Michael Bay is going to look like pic.twitter.com/0ZKCuJOyES

We live in a world where a Dora the Explorer movie with Michael Bay as its producer is going to be a thing.

This is the darkest timeline.

Michael Bay Producing? Dora and Boots are about to be running through a field of explosives. Swiper will probably have an RPG. Here we go. https://t.co/gZtEe39rGS

There's no official release date for Dora just yet but it's expected to drop in 2019. And to be honest, if it's anything like College Humor's version of the same adaptation, then you can cash us inside movie theatres very soon.