CONFIRMED: Emma Roberts Is Returning To "AHS: Cult" And Everyone Is Losing Their Minds 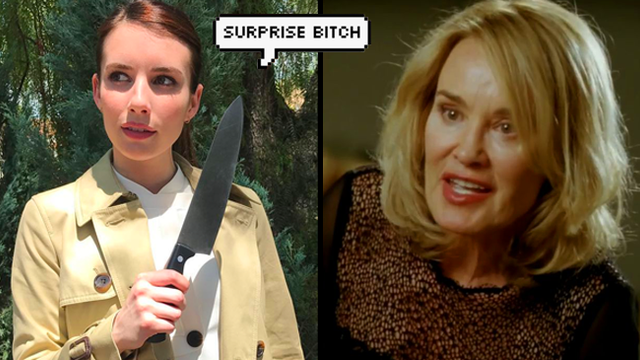 She's back! She's finally back!

Just when you thought you’d seen the last of her, Ryan Murphy just confirmed the long-awaited return of one of American Horror Story’s most iconic actors and the internet had an absolute meltdown. It is at this point we regret to inform you that the actor in question is NOT Jessica Lange. (We’re so sorry.)

Last night (August 1) Murphy uploaded a picture of the one and only Emma Roberts on the set of Cult wearing a trench coat and a carving knife alongside the caption “Look who showed up on the set of Cult looking glamorous and ready for action.”

Fans had been speculating about Roberts’ inclusion in the season after she retweeted one of the Cult teaser trailers. Many thought it was just Emma showing support for her boyfriend Evan Peters but the rest of us KNEW something was up.

It was rumoured that Murphy had tried to get Emma a role on Hotel back in 2015 but plans fell through and she didn’t end up making an appearance. There was also word on the street that she would return for Roanoke but again… nothing. And now that Scream Queens has been cancelled, we guess there was no excuse for Madison Montgomery herself to skip another season.

And it looks like we’re about to have Chanel and Chanel #3 back together again.

No other details about her character have been revealed, except that she looks good in a trench coat and that she’s good at holding big knives (to be fair - both great qualities for anyone on AHS) so we’ll just have to sit tight and see what happens on September 5th.

How about that for a surprise, bitch?