Excusez Moi, But Why Does This Emma Watson Doll Look Like Justin Bieber? 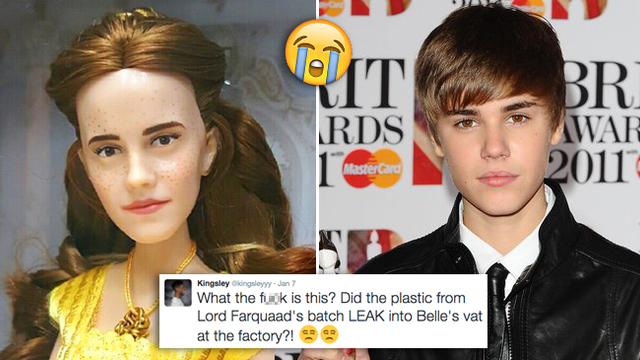 We were pretty excited about it to be honest; a brand new generation of kids, falling in love once again with everyone's high-key favourite Disney Princess and reigniting their love for Hermione in the proc----

What the fuck is this? Did the plastic from Lord Farquaad's batch LEAK into Belle's vat at the factory?! pic.twitter.com/Q8uJJfDnE5

What on earth has happened here? Surely that can't be an official product, right? We hate to break it to you but gurl, it is legit. First spotted by Flickr user ozthegreatandpowerful in a store, the pictures suddenly went viral on Twitter.

they thought they made a nice emma as belle doll but instead they made a justin bieber doll pic.twitter.com/lbApA05pu0

when you order an emma watson doll online but a justin bieber doll in a yellow dress & a wig arrives instead pic.twitter.com/PUQUBXyufT

This doll looks like Jennifer Garner trying to disguise herself as Emma Watson in an episode of Alias. pic.twitter.com/c071qeSdXN

It's not only Justin that bares a striking resemblance to um... Belle. She looks a bit like YouTube's Alfie Deyes too.

Honestly, what is going on here? There's surely already a cast for Emma's flawless out there in the world so why didn't you lot just @ each other... we could have avoided this mess?!