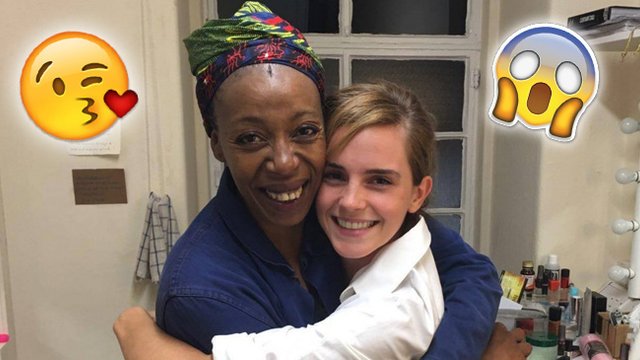 Hermione has been using her time turner again.

Emma Watson made this dream a reality by stopping by the Palace Theatre in London on Wednesday night (6 July) for a performance of Harry Potter and The Cursed Child.

The play is set 19 years after all the drama that went down at Hogwarts. Harry's now working at the Ministry of Magic and has spawned a few kids with mega babe Ginny Weasley.

Emma was one of the lucky few that got tickets to the show (she probably got them for free tbh) and she met the entire cast backstage after the performance - including the future Hermione, Noma Dumezweni. She took to Facebook to share her feelings about the show and some pictures with the crew too.

The two Hermionie's locked in an embrace. DYING.

No, seriously. Stop it.

Someone call an ambulance for me right now.

In the FB post, Emma wrote, "Yesterday I went to see the Cursed Child. I came in with no idea what to expect and it was AMAZING. Some things about the play were, I think, possibly even more beautiful than the films. Having seen it I felt more connected to Hermione and the stories than I have since Deathly Hallows came out, which was such a gift."

"Meeting Noma and seeing her on stage was like meeting my older self" Emma explained.  "and have[sic] her tell me everything was going to be alright, which as you can imagine was immensely comforting (and emotional)! The cast and crew welcomed me like I was family and Noma was everything I could ever hope she would be. She's wonderful. The music is beautiful… I could go on… Here are some pics of me meeting Noma and the crew. Love, E xx ‪#‎keepthesecrets‬ ‪#‎19yearslater‬"

Have you got tickets for The Cursed Child now? Should there be an annual Hermione convention? Let us know your thoughts in the comments.