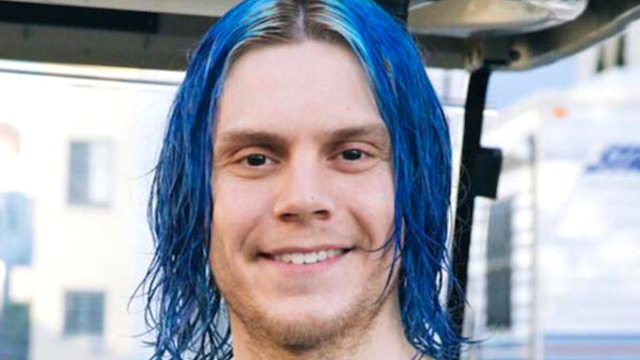 Filming on American Horror Story: Cult officially wrapped last week and it seems like Evan Peters wasted no time in getting rid of Kai's iconic blue hair do because he's shaved his entire head. Yep. Gone. All of it. All that long hair. The blue. It is no more. Evan has finally got Kai Anderson out of his system and that's the end of that.

Appearing at a press conference for AHS: Cult alongside Billie Lourd and Billie Eichner, he unveiled his new do and well... it's pretty spectacular.

It's literally the shortest hair we've ever seen him sporting. EVER. He looks so different and no one can cope.

what happened to Evan Peters hair

@Evan_Peters WHY??? I loved your blue hair. Anyway, you look amazing, so beautiful! pic.twitter.com/DoC90MZR2S

Some fans were passionately against Evan's new look, leaving comments on Instagram like, "Wtf happened to his hair?!?" and "It’s a no from me," while others were absolutely LIVING for the new era.

"OH HE LOOKS GOOD!" (That, my fellow Evan stans, is the correct answer. Honestly, we've seen him work every hair colour and style under the sun, what makes you think he wasn't gonna slay a buzz cut?!)

It's unknown WHEN exactly Evan shaved his head but could Kai's fate at the end of the season result in Evan having to chop off his locks for the role? Did Evan shave his head as a wrap celebration, or is Kai getting sent to Briarcliff? Send us your conspiracy theories.

In conclusion, a new Evan Peters era is upon us once again... pour one out for Kai Anderson.