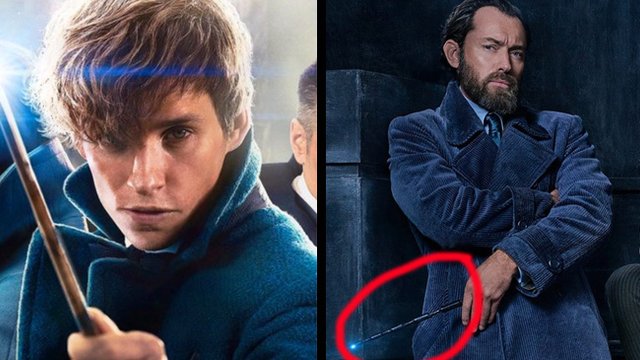 There's only one date that matters for any keen Potter heads out there and that's the day we finally get to see Dumbledore in Fantastic Beasts 2, which we now know will be called Fantastic Beasts: The Crimes of Grindelwald.

Young Dumbledore, played by Jude Law, has been confirmed to feature in the second instalment of the franchise and fans got a tiny peak of what to expect when the official FB twitter account posted this photo of two wands.

As you might have spotted, the wand on the left is the Elder Wand - which at one point in its history belonged to evil wizard Gellert Grindelwald (played by Johnny Depp) - but the other one remained a bit of a mystery. That was until they tweet out a picture of Jude Law as Young Doubledore holding the very same wand!

In one year, return to the Wizarding World with Fantastic Beasts: The Crimes of Grindelwald. #MagicInProgress #FantasticBeasts pic.twitter.com/8aWj8xhGj5

Why is this important? Let us break it down for you. Dumbledore's involvement in the Fantastic Beasts series largely revolves around his relationship with notorious dark wizard Gellert Grindelwald. It's a long story but the tl;dr is that Dumbledore and Grindelwald were friends but they later had a big falling out which resulted in the death of Dumbledore's sister Ariana. Some time after that Grindelwald obtains the Elder wand - one the Deathly Hallows and the most powerful wand in the history of wizardkind.

Grindelwald starts to amass power and ultimately becomes a threat to the wider wizarding world. In the end, Dumbledore is the only person who can stop him and they battle in what is described as "the greatest wizarding duel of all time". Obviously, Dumbledore wins because he's fucking Dumbledore. The wand then switches allegiances to Dumbledore because he defeats Grindelwald in the battle, which has many consequences years later with Voldemort which, tbh, we really cannot be arsed to get into.

So, does this mean we will see Dumbledore and Grindelwald will battle in the film? Looks like we'll have to wait for more clues from the Fantastic Beasts twitter account to find out.