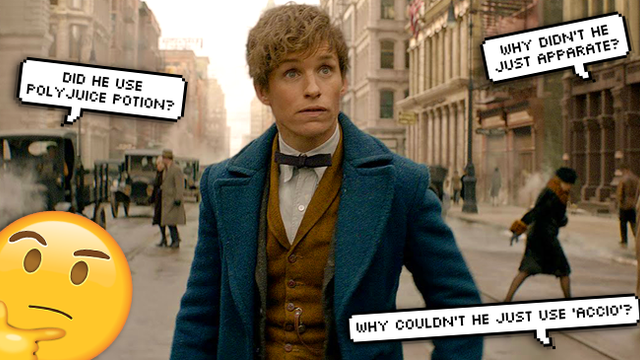 If you've seen Fantastic Beasts and Where To Find Them, then we're sure you have as many burning questions as we do. Like, why didn't Newt just use 'accio' on the freakin' Niffler? And how come he managed to uncover Graves' true identity with a basic charm?

In what appears to be the best Christmas gift we might receive this year, JK Rowling has taken to her brand new website to answer all the burning questions we keep tweeting at her and revealed some pretty great new info about the brand new wizarding world we got to take a peak of this year.

Why did Newt take a boat from the UK to New York? Couldn't he just bloody apparate across the Atlantic?

Rowling explained, “apparition becomes increasingly risky over long distances. As with most magic, much depends on the skill of the spell-caster: Apparition requires knowledge of the terrain to which one is moving, or the ability to visualise it clearly. Cross-continental Apparition would almost certainly result in severe injury of death." Makes sense, tbh.

Why did Newt go through the No-Maj customs instead of the Wizard customs?

Well, he was transporting magical creatures after all and that was 100% completely and utterly illegal at the time. Trying to fool a No-Maj is also MUCH easier than trying to fool a wizard.

Why couldn't Newt use 'accio' to retrieve all his beasts?

Because you can only use the summoning charm on inanimate objects, duh. You can *technically* 'accio' a person or an animal by summoning an object they're on or near but that would probably result in injury or death. So basically, just stick to the Broomsticks and discarded wands.

Why isn't Veritaserum used in interrogations?

Apparently, it is. But as Rowling explains, a gifted wizard could easily bypass the effects and a skilled Occlumens could resist the truth serum too.

Why did 'revelio' undo the effects of Polyjuice Potion?

Spoiler alert: it didn't. Did you really think Grindelwald, one of the most powerful wizards of his day, would have used a Polyjuice Potion? He used a transfiguration spell to turn himself into Graves - not a pesky potion that even first year Hogwarts students could whip up.

And the juiciest question of all: Why didn't Harry Potter develop an Obscurus?

Rowling explains that an Obscurus "is developed under very specific conditions: trauma associated with the use of magic, internalized hatred of one’s own magic and a conscious attempt to suppress it." Harry never went through that trauma because he was never taught to be ashamed or afraid of magic. Even when Petunia and Vernon scolded him for 'making things happen', Harry never made any attempts to repress his true nature.

And there you have it. Every question about Fantastic Beasts you've ever wanted to know.

At the end of her introductory blog post, Rowling also teased that she has much much much more information to share with us but spilling the tea right now would result in spoiling the storylines of future instalments of the Fantastic Beasts story.

DM us, Jo... we'll be your secret keepers. Promise we won't tell a soul!