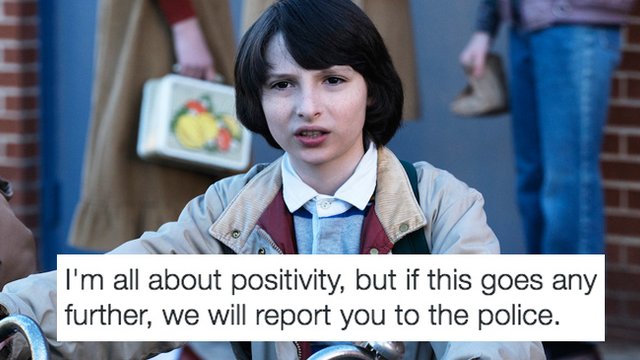 Finn sends an online troll straight to the Upside Down!

Finn Wolfhard, aka Mike from "Stranger Things", has called out online trolls who have been harassing a friend of his.

Finn took to Twitter to post a warning message to the "fan" who somehow obtained the personal information of his friend and has proceeded to send him abuse.

Hey guys. Somehow someone got my friends personal info and keeps texting him very harassing and degrading things. This is so messed up.

I'm all about positivity, but if this goes any further, we will report you to the police.

Lol he/or she is asking my friend if it will work on me. If you try to harass my friend again, you'll be reported immediately. 1/2

Finn is the latest celeb to directly call out online abuse, Halsey recently leaving Twitter due to offensive comments in the aftermath of the US presidential election.

If nothing else, at least situations like these show how widespread the problem really is and can help us work towards a solution on social media.

And hey, if it continues, at least Finn can just set the demogorgon on them!

Finn is soon to start filming season 2 of Stranger Things, set to air on Netflix next year.