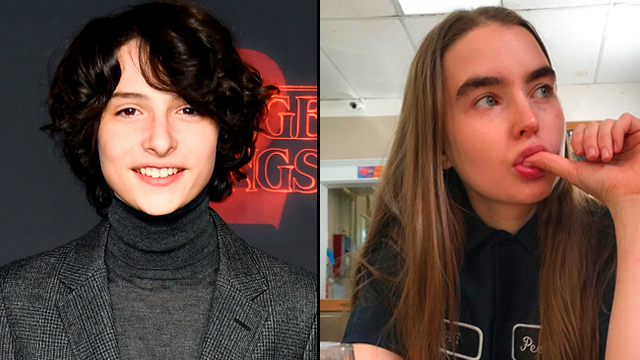 How many times do we have to say it? Stop sexualising child actors. Stop it. Stop saying they look "hot", stop saying that they'd "get it when they turn 18", just stop it. It's disgusting. This year has already seen a small minority of the IT fandom get called out for sexualising the teenage boys in the movie but sadly, it hasn't gone away.

Someone who didn't seem to get that memo was 27-year-old model Ali Michael who posted a disgustingly inappropriate Instagram story about Finn Wolfhard yesterday (Oct 30).

In the now deleted image, she screenshot an pic from Finn's Instagram and uploaded it to her own story with the caption "Not to be weird but hit me up in four years..." and proceeded to tag Finn in the image.

Honestly, it's weird and wrong to think it in the first place but to publish it on social media to your 241k followers as a "joke" AND tag him? That's disgusting. Also, just because it's an older female commenting on a younger male doesn't make it ANY different to a 30-year-old man screen-shotting a picture of a minor and making the same comments. Can you imagine if someone had done that to Millie Bobby Brown? It's no different. It's equally as horrifying. And she should be called out the same way a man would be.

Fans have flocked to social media to call her out on it and rightly so.

ali michael hitting on finn wolfhard.... honey you’re 30 he’s an actual child pls calm your ass down before you catch a charge.

i am the same age as finn is and i even got disgusted by ali michael's act. do you hear the police sirens in the distance?

Imagine a 28 year old man tweeting a picture of a 13-14 year old girl saying "hit me up in 4 years".. how is this any different