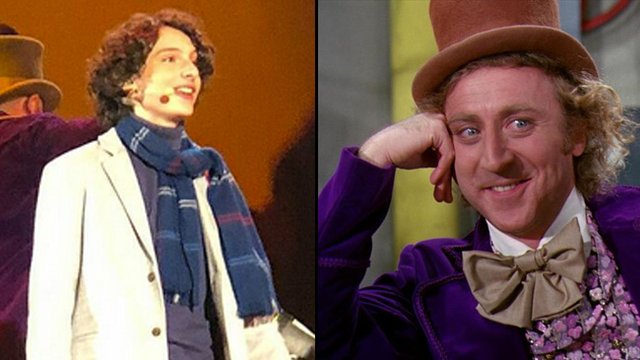 The 'It' and 'Stranger Things' star joined John Stamos, Elle King and Weird Al in the all-star concert performance of the classic movie.

As It breaks box office records worldwide and the second season of Stranger Things is making waves on Netflix, Finn Wolfhard has taken on yet another huge role - but this time he was singing.

As Variety previously reported, this weekend (November 3rd and 4th) saw Finn will take on the role of Charlie in a concert presentation of Willy Wonka & The Chocolate Factory at the Hollywood Bowl in California.

Finn was joined by John Stamos as Willy Wonka, Weird Al as the Oompa Loompas, Elle King as Veruca Salt, Giancarlo Espacito as The Candyman, Ingrid Michaelson as Mrs Bucket and Richard Kind as Grampa Joe. All the classic songs from the movie were featured including 'Pure Imagination', 'I've Got A Golden Ticket' and 'I Want It Now'.

Even more exciting, the show was presented in 'Smell-O-Rama', with exclusive Scratch-N-Sniff Golden Tickets providing fans with an extra sensory experience. The event also featured "a factory of treats, including a costume contest and special projections on the surface of the Bowl created by acclaimed painter, designer, and illustrator Shag".

Finn is of course no stranger to music, his band Calpurnia gaining a big following online thanks to their covers of 80s and grunge classics as well as TV themes like Twin Peaks.

Check out Finn Wolfhard and the rest of the cast in action in the video clips below:

i apologize for my shaking pic.twitter.com/WApE2GmnzG

So many amazing moments tonight at #willywonka but love this @finnwolfhardofficial drum action on #ilovecandy fantastic show! #strangerthings indeed!!