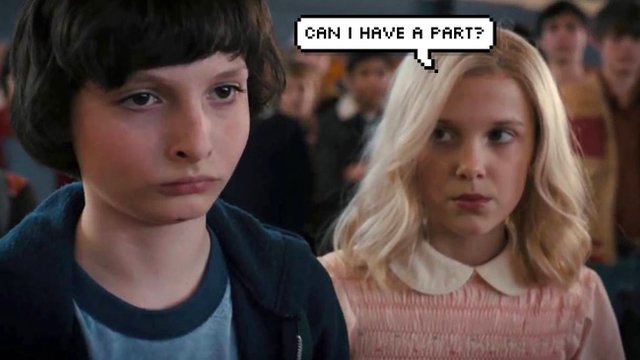 Could a Mike and Eleven be reunion be happening sooner than expected?

Everyone remembers making a TV or radio show as a kid. Usually it would involve a long-forgotten, slightly-broken camera found in the back of your dad's closet, or a tape machine with a mic from the pre-internet age. RIP Cassettes. We miss you greatly.

But those days are long gone and if you needed evidence consider the latest project from Finn Wolfhard, aka Mike Wheeler from Stranger Things, who is trying to raise $6500 via crowdsourcing to make a music video.

Sounds like a fancy video, right? What's wrong with using a shaky video from your phone and editing it together in iMovie, we hear you ask? Well Finn has a bigger vision and, to be fair, it sounds really cool.

The video will be for a song by the band Playdate, from Orange County, and will tell the story of 14-year-old Spike, played by Finn, who wants to rescue 14-year-old Emily from an abusive household. No word on who is playing Emily yet but we hear Milly Bobbie Brown is available for other projects. Just a thought!

On the IndieGoGo page, Finn and his collaborator, Vine star Josh Ovalle, describe what inspired the story and what they'd like to do with the money.

"We're really drawn to Westerns like "The Good, the Bad and the Ugly," because the characters are so bad ass, super interesting, and iconic. The conflict is also so intense- classic stand offs, back stabbing...etc"

"So as teenagers, bringing this genre into our modern world, how would that translate into a suburban neighborhood? And how would a teenaged vigilante, played by Finn, look like? We think this is a really cool, unexplored concept that would be really fun and interesting to see through."

Saddle up bitches, we're in for a Western! We're 100% sold. And, guess what? The boys just met their target and so the shoot is going to go ahead! Come thru Mike & Eleven, the Spaghetti Western!