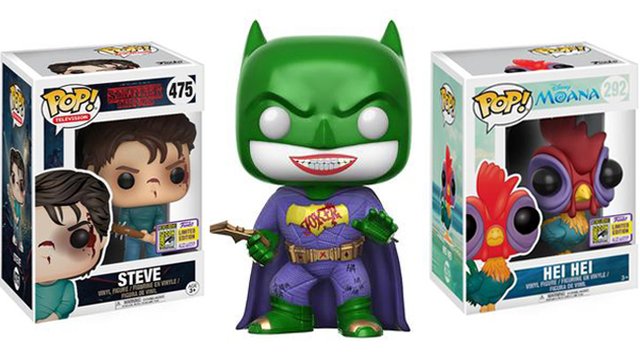 From 'Stranger Things' to 'Supernatural' and 'Suicide Squad' via Disney, HBO, 'Harry Potter' and more, here are ALL of the exclusive Funko Pops you can grab at SDCC this summer.

It's almost that time of year once again! Yep, time to dust off your costume, book a ticket to San Diego and get ready for several days of fan hysteria as SDCC aka the legendary Comic Con kicks into gear later this month.

But, not only should you be excited about the many movie and TV previews that will be dropping in the coming weeks, you should also be ready to spend a LOT of your hard earned cash on the exclusive line of Funko Pop Dolls set to be made available to the 130,000 (!) lucky punters in attendance.

The Funko Pop Limited Edition collection normally retails at around $15 and has become something of an SDCC tradition with many of the figures made available to fans across the country after the event (if you are quick enough to snap them up). So, which models do we have our eye on this year?

Here's the low down on all of the dolls you can pick up at the end of the month: Let's be real - who doesn't want their own version of Hei Hei from Moana? Think of all the awesome boat trips you can go on together! Plus, as if that wasn't enough, the Mouse House have also put together some Disney Parks inspired characters like Mr Toad from his Wild Ride and new Aladdin and Pirates Of The Carribbean sets too. Check out the full selection in the video below. if you loved Rogue One as much as we did, you'll be delighted to see that Bodhi and a Combat Assault Tank Trooper have both made the cut this year. Plus, there's the adorable Leia and R2D2 double pack not to mention a Supreme Leader Snoke which even glows in the dark. So many classic cartoons on sale here, from Marvin The Martian to Daffy Duck and even Scooby Doo available in a variety of bright colours. Plus, they even have several members of the Wacky Races cast with accompanying cars so you can have an actual race in your backyard.

Whether you can't wait for the next season of Game Of Thrones or you are attempting to break out of WestWorld, HBO have got you covered with figures including The Mountain, Young Ford and the unbelievable adorable Tormund and Brienne two-pack that is, frankly, too precious for this world. Captain America in a Bucky cap. Need we say more? Oh, ok, well you can also grab Tony Stark in his garb from the brilliant new Spider-Man: Homecoming movie and GwenPool available in two different varieties. Dean and Baby together at last! This will be top choice for all Supernatural fans but you can also get several new Harry Potter-themed items including Luna Lovegood in a pair of very snazzy looking glasses. Whether you are a fan of the comics of Edgar 'Baby Driver' Wright's superb Michael-Cera starring movie, you will defo want to get your hands on this line of figures, complete with sword of destiny and colourful Adidas-style classic trainers. Fans of Stranger Things are in luck with new models of both Steve and Mr. Clarke available exclusively. Plus, Twin Peaks, Doctor Who, The Tick, The Walking Dead and Mr Robot are all also present and correct. Add to your neverending collection of Suicide Squad-swag with this nifty Batman in Joker costume figurine. The comics giant will also be putting out characters from Justice League and current epic Wonder Woman on sale so grab them quick as they are sure to be hugely popular. Easily the most schwifty item of SDCC, this Tinkles and Ghost in a Jar set should help tide you over until season 3 kicks off. Now, where can we get a Pickle Rick toy while we're at it?