There's A Theory That "AHS: Roanoke” Is Linked To “Coven" And We're Sweating 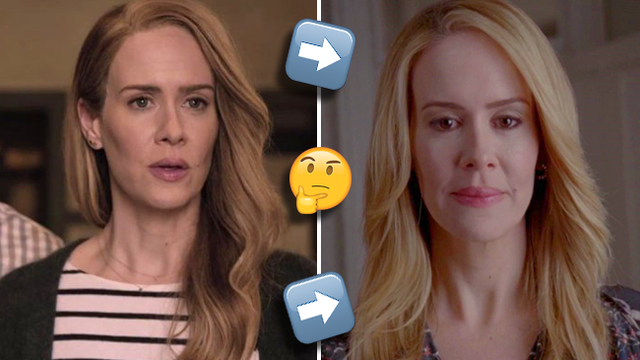 Haaaaaaang on a second - is Shelby a witch?

Calling all American Horror Story truthers. We're now two episodes in, Evan Peters is nowhere to be seen and no one knows what the HELL is going on anyway so we've gone digging for theories.

The show is already brimming with conspiracy theories and links to the very first season but what if we told you Shelby - aka Emmy Award winning Queen Sarah Paulson - might be a secret witch and this season has heavy links back to Coven?

Tell me more, I hear you cry!

According to this theory, Shelby *might* actually be a witch and has unwittingly been using her "powers" to make things happen.

Cast your minds back to the first episode where Matt (Cuba Gooding Jr) gets beaten up by a gang. He ends up in hospital, barely alive. This theory suggests that Shelby, who may or may not be a secret witch, actually used "Vitalum Vitalis to swap the life force of her unborn baby with that of Matt's." Remember that spell from Coven, where one life must be swapped for another in order to survive? That's the one.

Hmmm... It's kinda funny how she said "knew" Matt would wake up when she touched him, right? And at that precise moment, just before she touched him, she lost the baby. Was it an unconscious thing or did "something" tell her to do it?

The theory goes onto explain that "there's a lot of overlap with Misty Day as well, Shelby being a modern version of her (literally, because hiya Lily Rabe!) with an affinity for yoga and fresh veggies..." Interesting. Ok. We're starting to believe this.

Whatever is going on, there's definitely something weird AF going on with Shelby and we BET it has something to do with some secret witchy powers.

Shelby is the next Supreme. Confirmed.