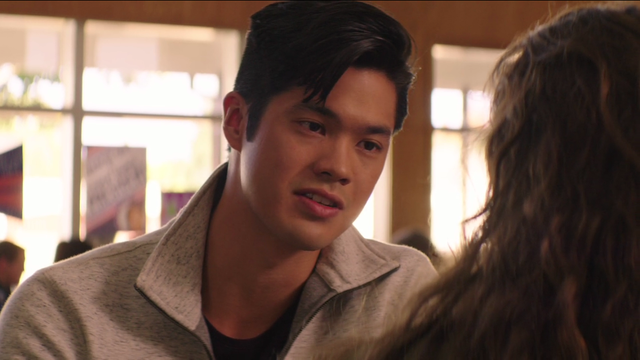 We bet you totally forgot about this scene.

13 Reasons Why tells a complicated story by inviting viewers to analyze each and every character and their behaviours. Hannah Baker is our narrator throughout the tapes but, for many people, it's easy to gloss over the fact that Hannah is actually an unreliable narrator.

Ross Butler, who plays Zach Dempsey, spoke to Coveteur about one of the most perplexing scenes in the show. Why did Hannah say she saw Zach throw away her note when he kept it the whole time? Throughout the show she is called a liar by the other characters but this is the first instance where we see that something Hannah described was completely different to what happened.

"I think my episode is where it makes the viewers question if she’s lying, because there’s talk about what’s her truth? [...] It levels the playing field to say, ‘Yes, this is all being seen from Hannah’s perspective, but not everything she said could be true.’ It doesn’t mean she’s lying, but maybe she genuinely thought that she saw me throw it away, and the truth is, I kept it. My episode gives the viewers new perspective and a new way of thinking about her perspective."

Because Hannah is the one telling the story, we assume that everything she is saying must be true. Yes, Hannah's spirit was crushed by Zach's behaviour but her perspective isn't entirely reliable.

Ross is right when he says that she could have truly believed she saw something that she never did. It also puts the viewers in the strange position of reconsidering everything they've seen and heard about Hannah's story.

Saying that, it's safe to assume that basically 95% of what we see from Hannah is true, so the overall message of her story doesn't change. Hurt and pain always have a way of clouding our perspectives and making us see and hear things that aren't completely in line with reality.

As season 2 approaches and we expand on the other characters in the show, it will be interesting to see how different perspectives shape what we see from the group of friends.