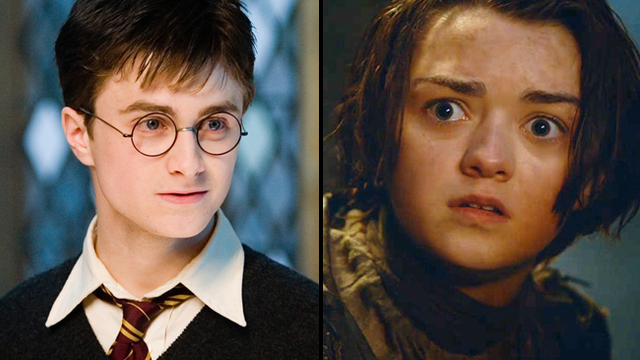 Samwell Tarly... the boy who lived?

After a year of waiting, Game of Thrones is FINALLY back on our screens. Daenerys has reached Dragonstone, Cersei's crown is already shaking, lil' Lady Mormont is back kickin' ass and literally NO ONE is safe. And in case you missed it amongst all the drama, there was a very very VERY sneaky reference to Harry Potter in one of the scenes.

No, it wasn't the fact that infamous Weasley extended family member Ed Sheeran appeared in the words to serenade Her Savagesty Arya Stark with a song cut from his record breaking album Divide. No. The reference itself appeared in a scene with none other than Professor Slughorn himself, Jim Broadbent.

When we check in with Samwell Tarly at the Citadel, he's trying to juggle his 9 to 5 duties (cleaning toilets) and his task of finding out how to destroy the white walkers. And to do that, he needs to find a book in a *certain section of the library*.

Do you see where we're going with this?

He asks Jim Broadbent's character, Archmaester Marwyn, how to get into the restricted section of the Citadel's library. And in case you don't remember, his character in Harry Potter was the one who informed a young Tom Riddle about Horcruxes from books and texts that can only be found in THE RESTRICTED SECTION oF THE LIBRARY.

Never mind the fact that winter is officially here... Sam is basically Tom Riddle/Harry Potter and everyone on Twitter is absolutely losing it.

#GOTS7 Sam should know better than to ask Jim Broadbent about books in the restricted section  #GameOfThones #HarryPotter #SamTarly pic.twitter.com/WGFSSeGmWw

Lol at Sam asking Professor Slughorn for access to the restricted section without bringing him crystallized pineapple. Idiot #GameOfThrones

Poor Jim Broadbent, everywhere he is, people are asking him about the restricted section in the library #GameOfThrones meets #HarryPotter

So where just not going to notice that this guy got asked about the "Restricted Section" in #GameOfThones & #HarryPotter #GameofThrones7 pic.twitter.com/64IGjqsLVx

The part where Sam goes to the restricted section and reads about how to destroy horcruxes #GameOfThrones pic.twitter.com/i3RTXVeU9q

Yo Sam is going in the restricted section, Walder Frey won't be happy... #GoTS7 pic.twitter.com/bzpHO3UM9L

Ok, so it's not QUITE a reference considering literally every library back in the day had restricted sections but IT STILL COUNTS, OK? Now, if only Sam had an invisibility cloak to do some unlimited midnight sleuthing on how to kill all those white walkers.