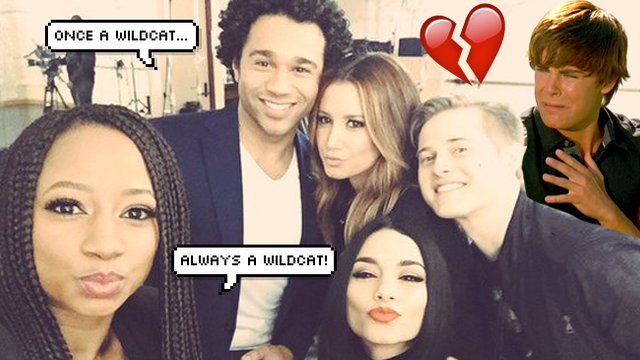 If you don't already have it marked on your calendar, the seminal classic and benchmark for all future Disney Original Movies, High School Musical is turning 10 years old on January 20th and THEY'RE HAVING. A. REUNION!

On January 17th, it was revealed that the cast - Vanessa Hudgens, Ashley Tisdale (Queen), Lucas Grabeel, Corbin Bleu and Monique Coleman - will appear together in a special telecast in honour of the film's anniversary. And they all documented their reunion on Twitter. Brace yourselves, it's gonna get emotional.

Ok... just try and hold it together.

Phew! Have you recovered? OK, great! Here's another reason to cry... Zac Efron didn't turn up!

When it hits you that Zac Efron was not at the reunion #HSMReunion pic.twitter.com/NUSjArzX4i

The Bro Formally Known As Zefron did not make an appearance at what could have been the best reunion of all our millennial lives. And Twitter was not having it.

LISTEN UP, ZAC. What happened to the Team, huh? What happened to 'We're All in This Together'? We get that you've got important shirtless conventions to attend but seriously, where were you when your squad needed you the most? Why did you let your bro responsibilities eclipse what really matters? THE STATUS QUO, ZAC! WHAT ABOUT THE STATUS QUO? Do you think this is a game? THIS IS STATE CHAMPS, ZAC! We saw Coach Bolton crying the hallway. Ms Darbus has resigned.... You too good for the Wildcats, huh? HUH? ARE YOU TRYING TO BREAK FREE?! You know what... we're just fine without you. Really. Honestly. Don't worry about us. AT. ALL. *tries to sing We're All In This Together through sobs*

Quiz: Zac Efron Doesn't Know The Lyrics To "Breaking Free". Do You?