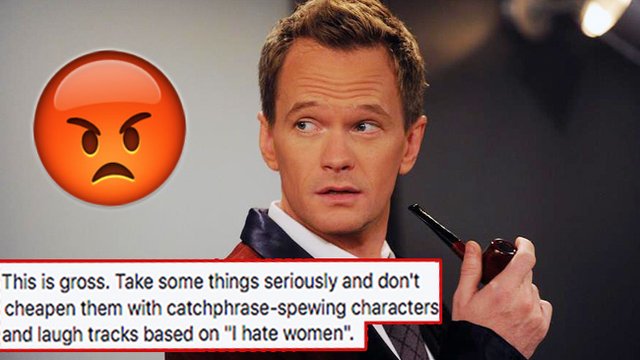 The sitcom managed to mark MLK day "bro" style and it was NOT legendary...

The people behind the sitcom How I Met Your Mother are facing major criticism after the show's Facebook page posted the world's worst tribute to Martin Luther King...

Mashable reports that the official HIMYM Facebook page marked MLK Day (January 16th) by posting a "tribute" message based on King's famous 'I Have A Dream' speech in the style of Barney Stinson, the famous womaniser character played by Neil Patrick Harris.

Yep, according to the fake speech, Barney has a dream that "black and white chicks will come together in my bed" and "all tee-shirts will be wet and boob jobs will be free."

Really bro? How did you manage to take MLK Day and turn it into a celebration of getting laid? You guys messed this one up even worse than your series finale (yes, we are still not over that!).

And while some fans simply laughed it all off, many on the page were quick to point out everything wrong within the post:

No word yet from the show makers or people behind the page but at least Neil Patrick Harris himself showed far more restraint with his words in tribute to MLK:

'I have decided to stick with love. Hate is too great a burden to bear.' - Martin Luther King, Jr.

What do you make of the HIMYM message? Did they go too far? Or are we overreacting? Let us know your thoughts below.