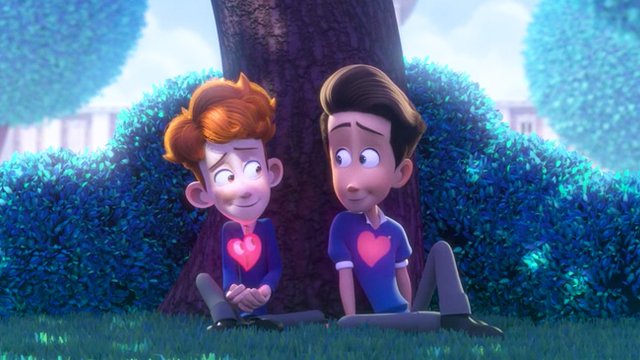 Prepare for your heart to break into a million pieces and then heal again thanks to this short animated film and the power of LOVE.

In A Heartbeat has racked up an impressive 5.4 million views since it was released two days ago (31 July). The heartwarming four-minute film follows Sherwin, a boy who is in the closet, as his heart chases his crush, Jonathan, around school.

Produced at Ringling College of Art and Design by Beth David and Esteban Bravo, the creators said they wanted to help people understand what it’s like to be a closeted teenager struggling with new feelings.

In an interview with NBC, David said the initial pitch for the story was between a boy and a girl, "but it wasn’t until we made it about a same-gender crush that the idea really started to take form and resonate with Esteban and I. We realised that we had something that could potentially be really special to us.

"We wanted to challenge the preconceived notion that LGBTQ content is not appropriate or suitable for younger audiences,” Bravo said. “It’s an innocent and lighthearted story about a boy and his crush that we hope will resonate with younger people regardless of their background.”

And it clearly has resonated with many people, proving that audiences are ready for LGBTQ content that is appropriate for younger viewers.

in a heartbeat is the best thing that happened in 2017 pic.twitter.com/9hQPye0CY8

Sherwin and his runaway heart have already been turned into a meme.

me when he's over 6'1, lives alone, has a good credit score, and a beard pic.twitter.com/Vh60xCja1q

Basically we need this to be a full length film asap.

If I paid 18 quid to see In A Heartbeat in the cinema, I wouldn't complain. A fantastic short film highlighting that love is love

David and Bravo told NBC that they will be showing In a Heartbeat to different film festivals and will continue to bounce ideas between each other about where to take the characters and story next. And honestly, we can wait!