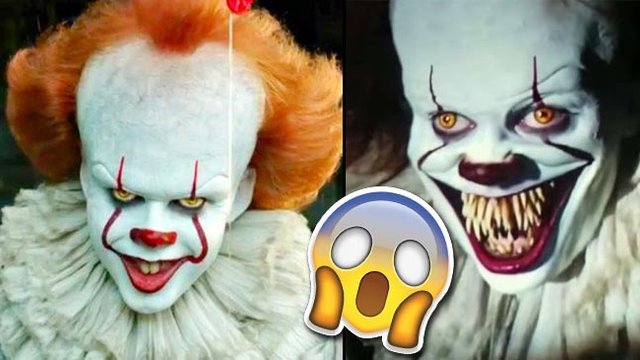 Bill Skarsgård shot the sequence which left him 'disturbed' as we saw Pennywise's horrifying origin story.

By now, you will be aware of the instant horror movie classic IT, an adaptation of Stephen King's novel that is STILL tearing up the worldwide box office months since it's initial release date.

And, if you are like us, you'll have been pouring over all the extra details you can find on bonus scenes, casting theories and sequel sneak peaks to tide you over until part 2 arrives.

Recently, Bill Skarsgård who plays Pennywise the dancing clown told an interviewer that there is one cut scene from the movie that shows Pennywise's origins which he found particularly 'disturbing' but didn't give many details beyond that.

Well now we know why Bill was freaked out - it's because he had to eat a baby!

A full description of the scene where Pennywise convinces a mother to give him her baby has made it onto Reddit and it ain't for the faint of heart:

"She turns away from the baby. Faces those dying embers. We keep on her face as they seem to begin GLOWING BRIGHTER AS — OVER HER SHOULDER — OUT OF FOCUS — Pennywise crawls over to the baby and starts to feast. SHARP CRY FROM THE BABY CUT OFF as we hear a CRUNCH. Abigail continues to look into the BRIGHT ORANGE GLOW of not the flickering fire… …but the DEADLIGHTS. Her expression changing. Fear. Denial. Grief. Acceptance. And then nothing. Just a glazed look. AS IF NOTHING HORRIFIC IS ACTUALLY HAPPENING BEHIND HER".

Unlike the equally infamous sex scene, Skarsgård confirmed that they shot and completed this sequence so maybe we will see it pop up when the Director's Cut of the movie arrives on DVD and Blu Ray later this year.

You can buy a piece of Grimes’ soul for $10million

Here's how to support the Black Lives Matters protesters