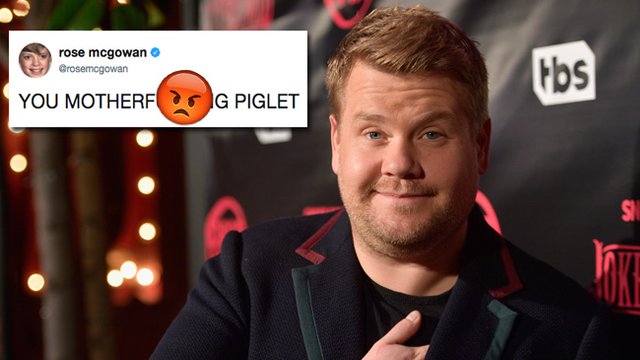 The late night host has apologised for his crass jokes but still appears to have missed the real reason why they didn't work.

James Corden became the most unpopular man on Twitter yesterday (October 15th) as he was roundly criticised for making a series of crude jokes regarding the recent sexual assault allegations against movie producer Harvey Weinstein.

Corden was hosting the amfAR gala, in aid of Aids research, on Friday evening, opening proceedings with some boorish gags about Weinstein that were captured on video by reporter Chris Gardner.

me after hearing about James Corden make a joke about Harvey Weinstein Sexual Assault Allegations: pic.twitter.com/f8IxiV24Op

welcome to all the new members to james corden is bad club, unfortunately you have missed the deadline for our tenth anniversary dinner

After his name became a Twitter trending topic, with fans, and even some of Weinstein's accusers including Rose McGowan, calling him out for his jokes, the Late Late Show host issued an apology:

but to shame him, the abuser, not his victims. I am truly sorry for anyone offended, that was never my intention. (2/2)

However, some have argued online that this debate has been blown out of proportion. Surely, despite the poor timing, the mocking of a horrible power abuser should be celebrated and encouraged? If Corden meant to 'shame' Weinstein, why is everyone getting so angry? Here's why: because his jokes didn't shame him at all - they let him in on the gag.

While other late night comics like Seth Meyers, John Oliver and the Weekend Update team at SNL have also delivered jokes about the Harvey Weinstein scandal over the last week, they have approached the subject with a level of scorn and anger left completely absent from the Corden material. He didn't 'shame' Weinstein so much as gently mock him, with the whole speech coming across like a Comedy Central Roast or a Best Man's Speech at a rugby club wedding. If he weren't currently sporting a trademark white robe in the sauna of a sex rehab clinic somewhere, you would be forgiven for expecting the camera to suddenly cut with each punchline to Harvey himself, thigh-slapping away from the audience as he gets gently ribbed by his old showbiz pal.

so not only is James Corden making jokes about the sexual assault allegations against Weinstein, but it seems they're also pals - pic.twitter.com/yO4xE6uByU

James is far from the first comic to make this misstep (see Colbert's recent inclusion of Sean Spicer at the Emmys, Fallon's famous Trump hair-ruffle or Gervais letting Mel Gibson yuck it up about his anti-semitic drunken rants at the Golden Globes) but, given his longstanding friendship and working relationship with Weinstein (the pair worked on the film One Chance together in 2013), Corden's particular brand of 'lad' banter was even less appropriate here than in the past. Doesn't years of abuse deserve more ire than a couple of lame knob gags? By cheapening the seriousness of the allegations against the producer, he lost the audience and no amount of shouting 'come on' was going to win them back.

Perhaps before he inevitably addresses this latest controversy on his show this week, Corden should watch some of his contemporaries to get a sense of how this type of topic can be covered in a pointed fashion that remains sensitive to the victims. That, or maybe he should just stick to loudly singing other people's songs at them while driving. I would recommend the latter.