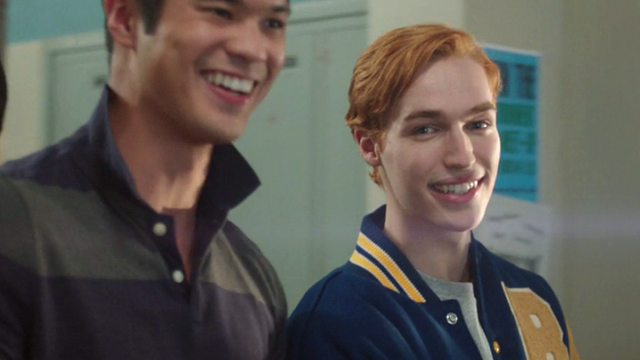 What do you MEAN Jason wasn't meant to be murdered?!

The day we finally learn the truth about Jason Blossom's death in Riverdale is drawing ever closer, and we've been getting our theories in check and updating our suspect boards before the big reveal.

But this reddit theory has just thrown a wrench into everything we thought we had nailed. It suggests that Jason was never actually meant to die and that Archie was the actual intended victim. Holy plot twist! Shall we examine the evidence?

It's been brought up in the show A LOT OF TIMES how much Jason and Archie look alike and it was pointed out that they were both down by Sweetwater River on July 4th - Jason with Cheryl and Archie with Ms Grundy.

Jason wasn't just shot, he was tied up and tortured. It wasn't like a 'Whoops I accidentally shot Jason Blossom' kind of thing. The person who killed Jason really meant for it to happen.

As the theory suggests, it's almost as if who ever killed him was trying to get information out of him. Only he wasn't giving any information, because he wasn't who the killer thought he was - it was a pure case of mistaken identity. And when they finally realised that Jason was not in fact your local oblivious fuccboi Archie, Jason was killed to make sure he stayed quiet.

But who killed him? By the theory's calculations, the only person that would have that kind of motive and vendetta against a redheaded, football playing student from Riverdale High would be Ms Grundy's violent ex-husband. (That's if he actually exists, of course.)

We know that Ms Grundy was helping Jason with his music but was she helping him as much as she was "helping" Archie? On July 4th, it's entirely plausible that Grundy's ex-husband caught the pair down at the river and stormed off only to find, and ultimately kill, Jason later on.

It's also pointed out that ~MAIN CHARACTER~ Archie has been suspiciously kept at arms length from the season's big mystery. Not to mention the fact that the Ms Grundy storyline was dropped and forgotten about in Episode 4 faster than Alice Cooper throwing a side eye at Penny Blossom. Are they trying to throw us off the scent?

It's a great theory but here's the gag... Surely it CAN'T be Grundy's ex-husband because when the rest of the cast found out the top secret piece of info, they were shook to the fullest. Surely a reveal as simple and logical as that wouldn't elicit such a dramatic reaction. (Unless they were doing it for the hype, in which case... how dare you.)

*sigh* We guess we'll know VERY SOON for sure when Jason's killer is finally revealed. In the meantime, there's still a chance to get your theories out in the open. Slide into our DMs and we can theorise together.