Jason Blossom's Killer Has Been Revealed And No One Can Cope 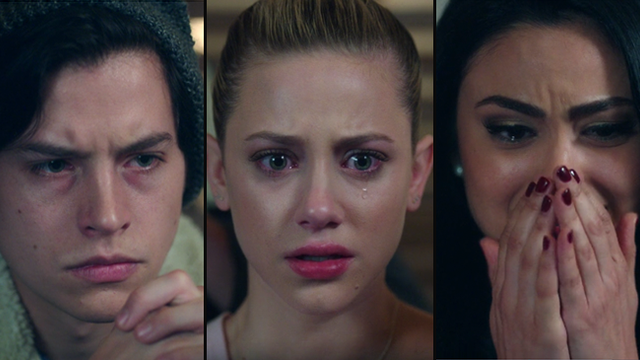 I think I need to be alone to think about what I've just seen.

It happened. After 11 episodes of pure torture and nothing but red herrings and confusion, Riverdale finally revealed Jason Blossom's killer and absolutely NO ONE saw it coming.

Now, before we go on, this article obviously contains BIG GIANT SPOILERS so please do not @ us if the big reveal is ruined for you. Remember, you did this to yourself.

WE WARNED YOU! If you're ready, let's get into it. THE SPOILERS WILL APPEAR AFTER THIS GIF.

Brace yourselves... Jason Blossom's killer was his dad, Clifford Blossom.

WHAT?! Here's what went down: F.P. initially confessed to murdering Jason. He explained Jason's entire plan to Sheriff Keller and then continued to spill the details on how he "killed" Jason. But then he confesses to breaking into the Sheriff's house and stealing the evidence - which we KNOW Hal Cooper did. Red flag, right?

Right. Anyway, back to the Coopers for a second. Later in the episode he reveals the plot twist of the f*cking century when he tells his family that they are in fact Blossoms. Back in the day, Betty's great-grandfather simply changed their family name to Cooper so they're still Blossoms by blood. And yes, that means Polly and Jason's relationship was incestuous. CHRIST.

Ok, now back to the Blossoms. Before he was murdered, it appears as though Jason found out that his father was shifting drugs and he was about to expose his ass. And that betrayal is what pushed Clifford into shooting Jason dead. It suddenly becomes clear that Clifford had been blackmailing FP in to taking the blame for everything - by threatening to kill Jughead.

Remember Jason's letterman jacket that FP had hanging up in his closet? The jacket ended up hidden in the woods somewhere and inside that was a USB of Clifford shooting Jason.

WHAT THE F*CK?! Absolutely no one saw that coming, including everyone at PopBuzz HQ.

My face when i found out who killed Jason Blossom #Riverdale pic.twitter.com/aGNoS0r4gI

My face when they showed who killed Jason Blossom #Riverdale pic.twitter.com/eu7vlr7fFW

HIS OWN FATHER KILLED JASON WHAT THE FUCK

At the end of the episode, as the police roll up to arrest Clifford, it appears that he has taken his own life. OR HAS HE? Did Cheryl or Penelope Blossom have anything to do with his death? Is Clifford's ~apparent suicide~ the second death that everyone has been teasing? Or does Archie have a hand in that in next week's episode? *sweating*