Jennifer Lawrence Is Shady As Hell And People Are Pissed 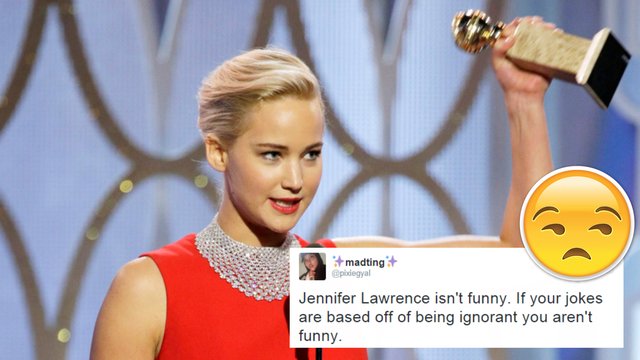 Was her joke just rude and mean?

Jennifer Lawrence has built an entire career around being "relatable" and fun, while simultaneously cultivating her image as a serious actor. She has always endeared herself to fans because she never took herself too seriously and was self-deprecating by nature.

Unfortunately, fans might think differently about Jennifer after her appearance at the Golden Globes.

Last night (January 10, 2016) at the Golden Globe Awards, Jennifer appeared to be rude to a reporter trying to ask her a question.

Jennifer Lawrence humiliated a reporter for reading off his phone when it's clear he's not a native English speaker https://t.co/gDdo96uByv

It's a side of Jennifer many of us haven't seen before. Many people have pointed out that the reporter spoke English as a second language and was likely looking down at notes or a translator app.

i felt so bad for the reporter when jennifer lawrence called him out for being on his phone. english probably isn't even his first language 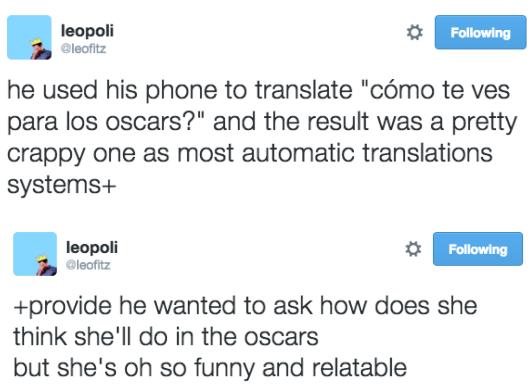 Fans are angry over the exchange and it seems that Jennifer's "relatable" persona has only made things worse.

Jennifer Lawrence is trying too hard to be relatable and funny, she is just plain rude

Jennifer Lawrence is very young and I'm pretty sure when she's older she'll distinguish between "rude" and "English as a second language."

lol jennifer lawrence calling out that reporter was not "quirky". it was rude and entitled and embarrassed someone just tryna doing his job

The issue with award shows and similar events, is that many members of the foreign press will almost certainly be in attendance. As a person who has been making films for half a decade, that is something Jennifer should have realized and handled with care.

Regardless, she has definitely rubbed people the wrong way. Maybe she was tired, maybe she was on the defensive, maybe she had been doing press for hours beforehand. Who knows? What people DO know is that the video looks bad and they want an apology.

Need this apology from Jennifer Lawrence as soon as possible

As Internet is Jennifer's biggest asset does she risk alienating fans by acting like this?