Jensen and Jared Revealed Their Favourite "Supernatural" Episode... But Do You Agree? 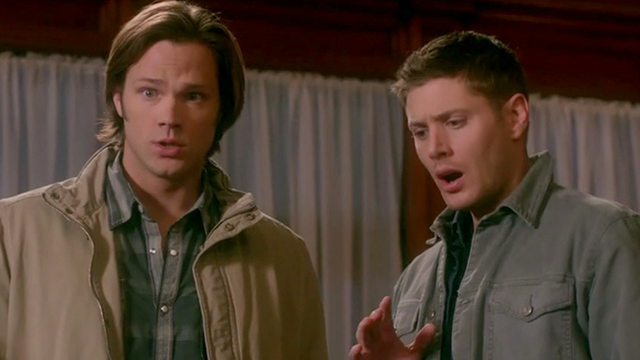 What actually IS the best episode of Supernatural tho?

If you ever asked us to pick our favourite episode of Supernatural, we would slap you square in the face. It's like asking us to choose ONE of our 250 children and leaving the rest for dead. It's impossible. We couldn't possibly do it.

But Jensen Ackles, Jared Padalecki and the rest of the Supernatural cast have managed it. They sat down with Entertainment Weekly to discuss their all time favourite episodes of the show and there's some pretty solid choices in there.

But do you agree with them? Let's find out...

Like, how very DARE you Jensen. Giving us feels at this time of day. God damn it, Bobby!

Jared disagreed. His favourite episode is... "The French Mistake".

Ok yes. Fine. If we HAD to choose, this would definitely be in the Top 3 episodes of all time. The episode where Sam and Dean enter an alternate reality only to find themselves on the set of Supernatural where everyone keeps calling them Jensen and Jared? Iconic.

Meanwhile, Misha Collins picked TWO favourite episodes (because he's Misha and he's allowed to be extra) which were "The French Mistake" (again) and "Everybody Hates Hitler".

As for the rest of them? Mark Sheppard (Crowley) picked "Abandon All Hope" from Season 5, Jim Beaver (Bobby) went for Season 6's "Weekend At Bobby's" and Mark Pellegrino aka Lucifer himself, went for "The French Mistake" (again again) alongside "Hammer Of The Gods" from Season 5. You can find the full list here.

So, it looks like "The French Mistake" has taken the crown but do you agree with their choices? What is YOUR favourite episode of Supernatural?