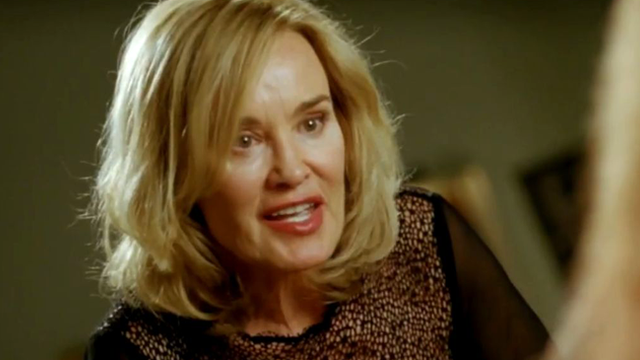 Dust off your black hats witch bitches, the Supreme is coming.

The sun is shining, the tank is clean, Ryan Murphy has just teased the return of the one true Queen of American Horror Story and I have never been so gassed in all my life.

Let's cast our minds back to the last time we saw Queen Jessica on AHS. It was Freak Show and she was Elsa Mars and it was glorious. And then she was gone.

There were whispers about her returning to Hotel (she reportedly had a role in the season, btw) but that didn't happen. And then there was a full blown conspiracy theory that she would manifest on Roanoke as the REAL Butcher but again, we were left empty handed. *sobs*

But now, with the news that there will be a Murder House/Coven crossover season hitting our screens no earlier than 2018, the possibility of Jessica returning to Murphy's hell scape is very very real.

Speaking with TVGuide at a red carpet event for Jessica's current show Feud, Ryan Murphy was asked whether or not she would be returning for the crossover season. His reply?

"I think she would if I bribed her enough, you know? I haven't really talked to her about it at all because we are still figuring out that story, but I think we do want to do that."

What we know of the crossover season so far is that characters from both season will feature but it will be one character from Murder House that will be thrown head first into the witchy goings on down in New Orleans.

As we left it, there were only three characters left alive at the end of Murder House; Sarah Paulson's Billie Dean Howard, the devil-spawn of Vivian Harmon and of course, the iconic Constance Langdon. Obviously, Fiona Goode is no longer on the scene but she's a Supreme so the possibility of her being brought back from the dead is like an 85% possibility.

Now, you and I both know that Ryan Murphy can be a very persuasive man (he was, after all, the one that persuaded Jessica to accept the gig in the first place) and I have every faith that he will deliver the goods again. In the meantime, I'll be preparing my wardrobe for her imminent return.