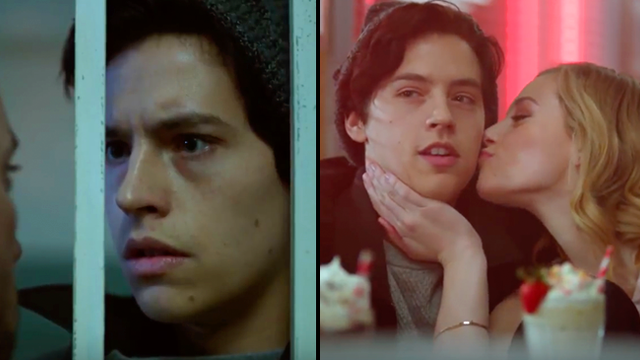 Juggie baby, what is you doin'?!

Now that the Riverdale Season One DVD has been released, all of the deleted scenes are making their way online and they're changing absolutely EVERYTHING we thought we knew about our new favourite show. Or, more specifically, our favourite character Jughead.

We've already seen one deleted scene that shows how different Juggie's ending was meant to be but now there's another one and we can't cope.

The first half of the scene, which should slide straight in after that deleted scene where Alice and Hal Cooper invite Jughead to stay at their house instead of being shipped off into foster care on the South Side, shows Jughead at Pop's with the squad just after the Jubilee. There's a cute Bughead moment just before he drops a BOMBSHELL about a secret that he hadn't shared with his friends.

But the real tea happens in the deleted scene AFTER that. Jughead, who we saw earlier in the final episode visiting his father FP in jail, told his dad that he was going to get himself involved with the Serpents to try and sleuth on who was dealing Clifford Blossom's drugs. Of course, in the show, we see the Serpents approach him and not the other way around.

Juggie tells his dad what he plans to do then FP warns him not to and reveals that he knows (!!!) exactly who is helping him and scares Juggie off the scent. (It's totally Hiram Lodge, right?! It has to be...)

Watch the scene below:

What do you think? Can you believe how much they cut and changed Jughead's storyline?! A storyline involving Jughead sleuthing as a double agent within the Serpents sounds amazing to be honest, but then again, there's still time for him to do all that now that he's secured *their* trust.

SEASON TWO JUST GOT REAL, YO!