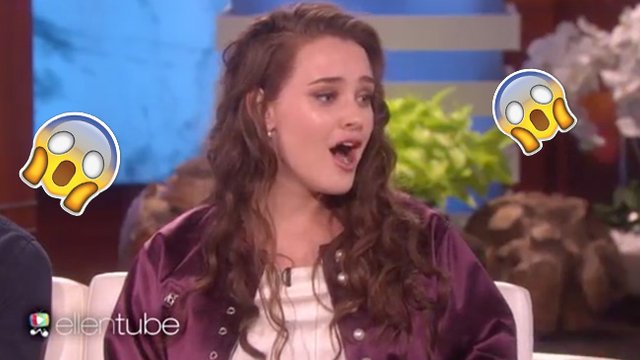 Let's say, hypothetically-speaking, your fave artist personally invites you to their concert for your 21st birthday. How the hell do you deal with such earth-shattering information? I'm pretty sure someone would need to call an ambulance if that happened to me but Katherine Langford, aka Hannah from 13 Reasons Why, handled it a little better...but only just!

Katherine and Dylan Minnette (Clay) hit up The Ellen DeGeneres Show on the promotional trail for their hit Netflix show 13 Reasons Why and it turned out that Ellen had a special surprise in store for Katherine. She asked the pair about the moment they realised the show was in fact a hit, to which Katherine responds:

"There was definitely a really big moment for me like a week ago," Langford said. "I don't have Twitter, but Lady Gaga tweeted at me, like reposted an interview where I was fangirling and wrote, 'Katherine' with a love heart. And I kind of freaked out a little bit."

Minnette added, "And if anyone knows Katherine, like, if we're doing an interview and I bring up the words 'Lady Gaga' we have to take a minute and stop. So that was a big moment for her."

That's when sneaky Ellen decided to to surprise Katherine for her 21st birthday with VIP passes to see Lady Gaga in concert with the opportunity to go backstage and meet the pop star in person! Watch the clip above to see Katherine try to hold back the tears.