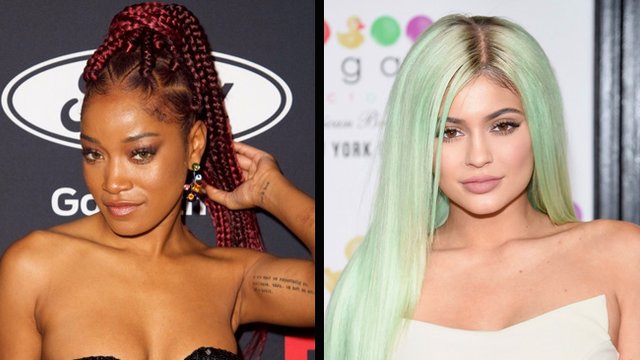 Everyone needs to chill the fuck out.

How do you stay true to yourself in the era of social media? That was the question being asked to Keke Palmer in a recent interview with Yahoo Beauty. The actress, singer & author was speaking about the judgemental nature of social media and how it essentially rewards those that conform to idealistic beauty standards. Nothing scandalous in saying that, right?

It's at that point that Keke uses Kylie Jenner as an example of how women combat this judgement, "[they] beat them to the punch and either degrade myself or be so damn perfect they have nothing to say. We’ve seen extremes of that."

"Specifically in the situation with Kylie", Keke explains, "where you’ve had a young girl people have seen on television since she was a kid and they literally told her she was so ugly … the ugly person in the family. She went and did apparently everything the world deems as beautiful. The even crazier part is that everybody loves her for it.

What I find interesting is that this is something that is being displayed to my generation — showing young girls, young guys that if you do everything that society wants you to be, not only will you be praised for it but you will make money for it. You can be profitable for not being who you truly are."

Since the interview Keke has faced a backlash against her comments. Several outlets have led with headlines suggesting that Keke "slams" Kylie Jenner for getting surgery. Others have criticised Keke, believing that Kylie has the right to do whatever she wants with her body, so long as she feels comfortable. But the gag is, they've completely missed the point.

Keke wasn't "calling out" Kylie Jenner, she was calling out society and how it harms women (and men's) self-esteem. Sure, there is absolutely nothing wrong with having surgery, but there is a problem with the culture that exists on social media where it's seemingly fine to tear people down for how they look, so much so that they are willing to get unnecessary procedures just to fit into society's idea of 'perfection'. And, in the case of Kylie Jenner, she's then made money by conforming to those beauty standards. Keke's right, there's something very sad about that. What does that say to other young people?

Thankfully, there were many people who agreed with Keke.

This statement is really geared toward how fucked up society is. She is basically just using Kylie as an example.

I agree with this 1000%. She worded this so beautifully. No disrespect... just straight facts!!! pic.twitter.com/FtEmSfzGsL

Keke didn't directly respond to the criticism but she did have this to say.

I been in this industry for like 15yrs and through my work I hope y'all can see how much I care about our generation!

Everybody won't like me, everybody won't understand me or be interested in the work I do. But no one can deny my passion! https://t.co/JPt3RlhRZE

I genuinely am inspired by all of what we are. I create through our filter and, yea, I love you guys https://t.co/QaXv3y8Fic