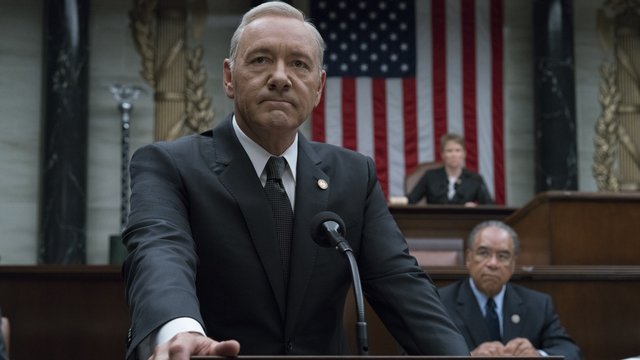 8 members of staff working on the Netflix series have come forward with new allegations against the actor.

Kevin Spacey is facing further allegations of sexual harassment as eight people who worked with the actor on Netflix series House Of Cards have now come forward with their own stories of inappropriate behaviour. Furthermore, it would appear that not only were show bosses informed about the behaviour but Spacey was forced to complete extra employee training as a result, a detail kept quiet from the public until now.

CNN reports that one production assistant claims he was sexually assaulted by Spacey, who plays the lead role of Frank Underwood, during an early season of the show. The assistant was driving the actor around set when Spacey allegedly put his hands down his pants in a non-consensual act:

"I was in a state of shock...He was a man in a very powerful position on the show and I was someone very low on the totem pole and on the food chain there."

The assistant says Spacey later cornered him in a trailer, blocking the exit while making more inappropriate contact, but soon became flustered and fled the set for the day.

The other men who spoke to CNN also described the set of House Of Cards as being "toxic" for young men, one crew member stating that they were repeatedly harassed by the actor:

"He would put his hands on me in weird ways. He would come in and massage my shoulders from behind or put his hands around me or touch my stomach sometimes in weird ways that in normal everyday conversation would not be appropriate."

At least one of the accusers interviewed had made a formal complaint about the behaviour to supervisors on set, however showrunner Beau Williamson has stated to Deadline that he was never informed about the incidents. In a new statement, Netflix also claim that they were "just made aware of one incident, five years ago, that we were informed was resolved swiftly." However, the show's producers MRC have revealed that following a complaint during Season 1 of the show "about a specific remark and gesture", Spacey was sent to complete a "training process", something never previously disclosed by either company.

Spacey has now been dropped by his agent at CAA and his publicist following the string of allegations. Netflix have halted production on House Of Cards and the actor is said to be entering further "evaluation and treatment" for his behaviour.